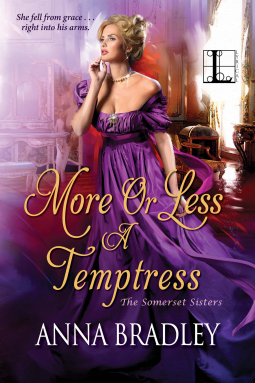 A beautiful debutante in Regency London seems destined to make a good match. But the Somerset sisters have made courtship and matrimony a deliciously scandalous affair . . .

Hyacinth Somerset’s debut is the most anticipated event of the season, as it will be the reclusive young lady’s first public appearance. But within moments of being asked to dance by a dashing stranger, Hyacinth calls him a murderer, then faints dead away! Now all the ton is a aflutter over Hyacinth’s baffling shun of their most intriguing newcomer—the wildly handsome Lachlan Ramsey . . .

Recently arrived from Scotland, Lachlan only wishes to claim his place in society to secure his sister’s future. When that is threatened by the accusations of a hapless slip of a girl, he will do anything protect his family. Yet it appears Hyacinth has only damaged her own hopes, inspiring the label of hysteric—and ultimately inspiring Lachlan to shelter her from harm. Now if only there were a defense for the surge of feeling he has every time Hyacinth turns her gaze his way. If only there were a way to make her his—while keeping the true secret in his past from destroying everything—and everyone—he cares about . . .

More or Less of a Temptress by Anna Bradley is a scandalous read. A Highland family is torn apart by death and scandal. They flee their only home they know and arrive in England. Their older half brother must find his true brother, a Marquess. Just upon their arrival they find themselves in a sticky situation. A young woman makes the mistake of calling their half brother a murderer. Thinking he killed his younger half brother, a lady faints telling everyone in the England ton he’s a murderer. But just as quickly as it escalated, it soon evaporates. The story was full of humor.

The young Scottish brother adds to the intensity of the situations at hand. I could not stop laughing. He didn’t know when to shut up or when to behave. But then he proved most charming and kind. Then there, the sister. She’s a Scottish woman being welcomed into the England ton as if she were just any lady. Half the times, she wanted to punch her brothers and the other times, she spends defending their honor.

Last but not least, is the older half-brother, Lach. He is surprised by the warm welcome from his older true brother. He didn’t expect such kindness or trust. Yet that’s exactly what he got. He is a rugged rough edged man with a big heart. He soon finds himself defending his sister-in-law. One who happens to be fussed over as a weak timid lady. However, Lach, finds her anything but weak. She never hesitated in calling him an ass. I found it funny when she did. Part of me wanted to hug for her boldness.

Anna Bradley created a story full of heat, passion, and enough action to keep me reading all night long. The characters were charming and full of life. I didn’t want to stop reading. As soon as I started, I was instantly lost within the book. Overall, I would recommend this heartfelt entertaining story to all readers.