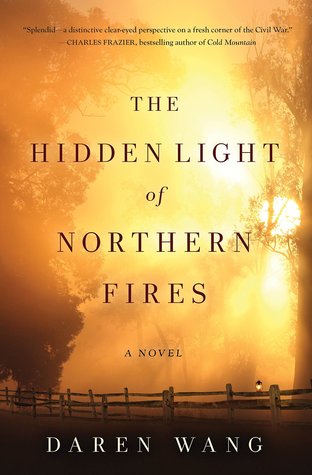 A novel rooted in the remarkable, but little-known, true history of the only secessionist town north of the Mason Dixon Line.

When escaped slave, Joe Bell, collapses in her father’s barn, Mary Willis must ward off Confederate guerillas and spies, Joe’s vengeful owner, and even her own brother to help the handsome fugitive cross to freedom.

Mary has always been an outcast, an outspoken abolitionist woman in a town of bounty hunters and anti-Union farmers. Helping runaways is the only thing that makes her life in Town Line bearable. As the countryside is riled by the drumbeat of civil war and the promise of an extravagant bounty for the wounded fugitive, Mary finds herself drawn to the stranger in forbidden ways. When rebels cross from nearby Canada intent on killing him, they bring the devastation of the brutal war to the town and the farm, and threaten to destroy all that Mary loves.

The Hidden Light of Northern Fires by Daren Wang is an interesting tale. It brought to life the Civil War. The troubles that were caused on both sides were felt. The issue of slavery so boldly told in this book. It started out slow and then grew to a moderate pace. The plot felt real. The writer made me feel like I was right there with the characters. Strong issues, fighting, and family themes were featured. Overall, it was entertaining.