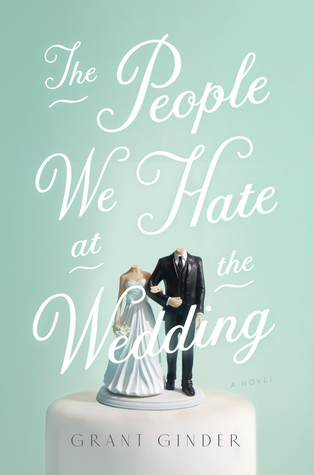 Relationships are awful. They’ll kill you, right up to the point where they start saving your life.

Paul and Alice’s half-sister Eloise is getting married! In London! There will be fancy hotels, dinners at “it” restaurants and a reception at a country estate complete with tea lights and embroidered cloth napkins.
They couldn’t hate it more.

The People We Hate at the Wedding is the story of a less than perfect family. Donna, the clan’s mother, is now a widow living in the Chicago suburbs with a penchant for the occasional joint and more than one glass of wine with her best friend while watching House Hunters International. Alice is in her thirties, single, smart, beautiful, stuck in a dead-end job where she is mired in a rather predictable, though enjoyable, affair with her married boss. Her brother Paul lives in Philadelphia with his older, handsomer, tenured track professor boyfriend who’s recently been saying things like “monogamy is an oppressive heteronormative construct,” while eyeing undergrads. And then there’s Eloise. Perfect, gorgeous, cultured Eloise. The product of Donna’s first marriage to a dashing Frenchman, Eloise has spent her school years at the best private boarding schools, her winter holidays in St. John and a post-college life cushioned by a fat, endless trust fund. To top it off, she’s infuriatingly kind and decent.

As this estranged clan gathers together, and Eloise’s walk down the aisle approaches, Grant Ginder brings to vivid, hilarious life the power of family, and the complicated ways we hate the ones we love the most in the most bitingly funny, slyly witty and surprisingly tender novel you’ll read this year.

The People We Hate at the Wedding by Grant Grinder is the slowest plot I have read. I couldn’t really get into the story. The beginning opened up with two siblings fighting over making sure they both were there for their half-sister’s wedding. The brother does not want to go at all. He feels anger and resentment towards her and her father.  The rich sister who is spoiled and has four-thousand-and-five-hundred dollars spent on just the wedding invitations. That was ridiculous even to me. I have not had the chance to meet this spoiled rich half-sister until much later on in the book. The brother is gay apparently and resents his half-sibling. Obviously a lot of family issues, hatred, and anger presented here. I could not get attached to the characters. However, I could easily understand the one sister trying to support her half-sibling despite any differences. I loved that tiny part of the book. Second point that I enjoyed was in the end. The brother ended up being there and gave the brotherly support and care that his half-sister, Eloise, needed. That right there made the moment. Getting to that point though, was boring and took too damn long. Otherwise, it has potential and was good.