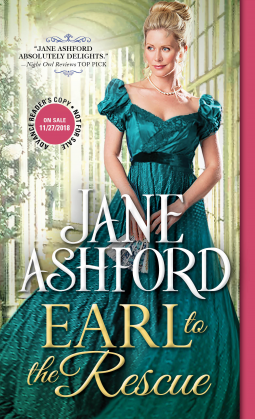 Who needs a knight in shining armor when there’s an earl at your side…?

Gwendeline Gregory doesn’t know what to think when she encounters the dashing Alex St. Audley, Earl of Merryn. She’s in over her head in London Society, trying to fend off a scoundrel who will stop at nothing to ruin her. On the brink of a devastating scandal, the earl arrives just when she needs him most. But are his motivations trustworthy? And can he avert ruin for both of them?

Earl to the Rescue by  Jane Ashford is an exciting twist to the usual foes that befall a young lady in a historical novel. Most young ladies have some sort of education and skill. Lady Gwendeline seems to have neither an education nor a useful skill. It felt pitiful. But she could still overcome her desperate situation in ways, that are more interesting.

Next, there’s the Earl, who is sounds like every woman’s fantasy. His looks would make many women swoon to the floor. Alex’s bold demeanor with the young lady was refreshing. Most gentleman stay away from touching a lady at all costs.  Unless, they want to beaten or forced in marriage. However, it appears this stranger, Alex, is there to rescue the now, penniless daughter, Gwendeline. That alone made him a hero in my book. His mannerism were charming and a bit funny. It was obvious there was more to Alex than he showed.

Jane Ashford created a book that lost me within its pages. Once I was in, I completely forgot the world around me. The characters lured me in deep. Funny, romantic, and adventurous this story was well-told. Overall, I highly recommend it to all readers.