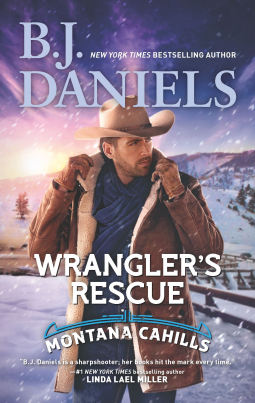 She’ll risk everything to bring her cowboy back home…

One week ago, Cyrus Cahill told Ashley Jo “AJ” Somerfield that he’d be back in her arms by the weekend. He just needed to buy a bull for his ranch, and then they’d pick up where they left off after that romantic ride through the foothills. But now he’s gone missing and everyone—even the sheriff—believes he’s dead.

Everyone…but AJ. She suspects foul play and she won’t rest until Cyrus is back home in Gilt Edge, right where he belongs. Because Cyrus isn’t the kind of cowboy who breaks a promise. And since she’s not the kind of woman who gives up on her man, AJ will risk anything to help bring him home…even her own life.

Wrangler’s Rescue by B.J. Daniels is a new twist to Cowboy romance novels. It feels more like a romantic suspense then a cowboy tale. Hot Cowboy in distress plus, a determined woman who won’t accept the fact that he’s dead made for an interesting read. I was surprised with the plot. There were many twists and turns. Keeping me guessing all the way through, B.J. Daniels created a mysterious journey. A disappearance, a call about a supposedly dead man, and a strange woman married to the said dead/missing man…had me for a loop. I couldn’t figure it out. I liked how I couldn’t figure out the story before it ended. However, it felt a little too much mystery and not enough action/romance.  Otherwise, it was a good read.