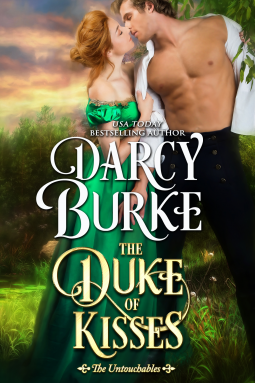 Frances Snowden can hardly believe her good fortune when she’s whisked away from her boring life by her sister who is now a duchess. Instead of becoming the third wife of her parents’ stuffy neighbor, she can be anything she wants: a doting aunt to her newborn niece, a debutante in London, or even an independent spinster. But when she meets and kisses a mysterious man on a walk in the countryside, she knows exactly what she desires—him.

David Langley, Earl of St. Ives, is resigned to marrying the dull woman his parents chose when he was a child. His future is suddenly, and happily, diverted when he encounters a captivating young woman who shows him everything he’s been missing. Ready to embark on a blissful life together, a long-buried feud between their families makes their marriage impossible. Nothing is more important than duty and family, but can he turn his back on love?

Duke of Kisses by Darcy Burke is an entertaining romance. This historical brings out a dark past that has haunted two families. When two young people met at Christmas time, they found something most don’t. Love…Neither one expected to see the other around later, so each told a bold lie. It wasn’t until circumstances brought them to London, that they find out the real truth. A blossoming romance that excites and intrigues readers, like myself…I could not help but to become more intrigued by the couple. Dashes of humor, suspense, and heat are included.

Darcy Burke brought two old families together in a single romance tale. Years of hatred, anger, and despair fixed. All it took was one time to fall in love. Both the Lady and Duke of Kisses find themselves stuck by family duty. Only they let it go for the chance to be together. Their happiness comes first. Themes of family, love, second chances, and forgiveness are explored throughout this piece. It was a read that kept me reading all night long.