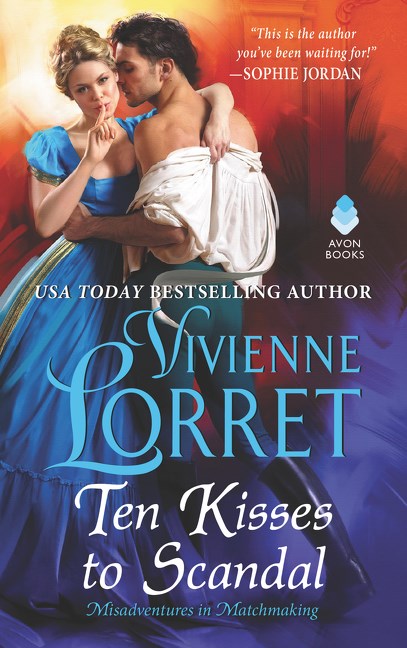 The Bourne Matrimonial Agency has one rule—never fall in love with the client. However, they never said anything about kissing a rake…

Briar Bourne’s matchmaking career could be summed up in two words—comic disaster. Unless she can learn about the irresistible forces that draw men and women together, her professional future looks rather bleak. But Briar has an intriguing plan—enlisting London’s most irredeemable rake to teach her everything he knows about attraction. Given his notorious reputation, it’s no surprise that Nicholas Blacklowe, the Earl of Edgemont, requests one thing in exchange for his tutelage. For every lesson, he wants a kiss in return. And what harm could there be in a simple kiss? After all, Briar would never fall for a scoundrel…

Nicholas has no romantic notions about love, and no intention of changing his ways. He’s only helping Briar so that she can find the perfect bride for his jilted cousin. Yet Briar is so clever, so curious, so candid—so blasted tempting—that soon, Nicholas can’t stop wondering what it might be like if he was irresistible to her.

Ten Kisses to Scandal by Vivienne Lorret is an enticing yet romantic historical. It took me on a wild ride of a push and pull romance. One gave her all to a man who would also pull away every time. But she wasn’t going to give up on him. Not ever…until he pushed her too far. By then, he found he had indeed fallen into a trap he so deemed he wouldn’t ever get into again. However, he was on full-board for it this go around. The once arrogant  scoundrel is finding he cannot live without the hope that his beautiful woman presented. And she once wanted everything he gave….then a secret broke out. Tearing apart would could have been their life. Could hope still exist where it was once broken? Vivienne Lorret had me  hoping all the way until the last page. It was addictive, engaging, and humorous too. I couldn’t help but to fall for each protagonist. Even the minor characters had me falling in love with this read. I highly recommend Ten Kisses to Scandal.