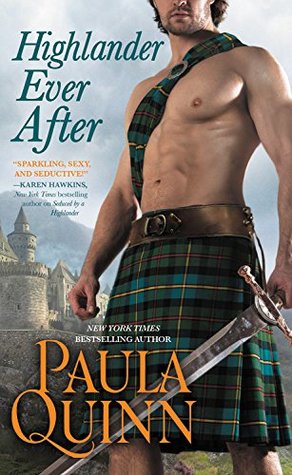 They tried to resist a marriage of convenience…

As the clan chief’s son, Adam MacGregor is duty-bound to marry a royal heir. Yet when he meets his bride—a beautiful but haughty young lass who thinks he is nothing more than a common savage—he realizes she’s more than he bargained for. But the more Adam gets to know his new wife, the more intent he is on proving her wrong about him.

But can they resist each other?
Sina de Arenberg wants nothing to do with the unsavory MacGregors, especially the fierce Highlander she now calls husband. But the more time she spends with the man she married, the more she sees his honor and courage. Just when she thinks there might be a future for her and Adam, Sina is called back to court. England isn’t the place she remembers, though, and soon she’ll be forced to choose between the life she once knew, and the Highlander who has captured her heart.

Highlander Ever After by Paula Quinn is a dashing bold romance. It was filled with action, betrayal, loss, and a blossoming relationship. Sina, the daughter of the new King, was sent to marry a man she didn’t love. She fought her way until the time of vows. Same with her newly betrothed, Adam. Adam is an Englishman and a Scotsman. He is the only tie that would bring peace to the Scottish clans and the Englanders. Adam vowed to try and make his new wife love him. That he does. And she falls…but then he finds a letter she wrote to a friend whom she loved. Adam lost it. He does not fight for her. He lets her back to her father. But deep down both he and Sina love each other. It was a heartfelt tale. Emotions broke out everywhere. Kept me engaged until the last page. Danger of war, lies to protect those they love, and betrayal by those whom were friends can be found in this read. Overall, I recommend Highlander Ever After to all readers.