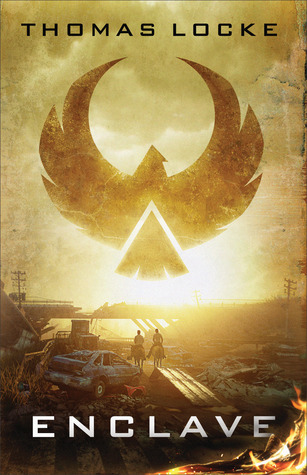 It’s been 50 years since the Great Crash and what was once America is now a collection of enclaves, governed on the local level and only loosely tied together by the farce of a federal government. Catawba, one of the largest and most affluent enclaves in the southern states, is relatively stable and maintains a successful business of trade with nearby enclaves, including the one at Charlotte Township. But when a new vein of gold is found beneath the feet of those in Catawba, it’s only a matter of time before trouble finds them.

Now the future of Catawba may be in the hands of an untried 21-year-old trader named Caleb. And Caleb knows that if his secret were ever to come out, he would never see another dawn.

Enclave by Thomas Locke is an entertaining read. Once halfway through it, I was excited. The plot felt alive. However, the beginning left me with so many questions. I wasn’t sure why or how the book started out the way it did. It wasn’t until later, the stuff finally made sense. I enjoyed the characters, especially Caleb. He’s the main guy. But he’s got this personality and way that dragged me further into his story. This novel is mostly a dystopian read. It was engaging once I got to met the cast of characters. Overall, Enclave is a must read.