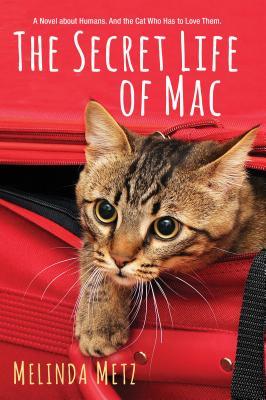 Inspired by the true story of a kleptomaniac cat who stole his way into America’s heart . . .

HE’S THE CAT THIEF OF LOVE
MacGyver the tabby is feeling very pleased with himself. His human, Jamie Snyder, has found the perfect packmate–and it’s all thanks to Mac. By stealing personal items from the home of Jamie’s handsome neighbor David, the matchmaking cat brought these two L.A. singles together. Now, while the newlyweds are off on their honeymoon, MacGyver is ready for a well-deserved cat nap. That is, until he meets his cat sitter Briony. Like most humans, she’s hopeless when it comes to romance. And Mac can’t resist a challenge . . .

SHE’S FOUND THE ESCAPE CLAWS
Briony feels terrible about leaving her fiance at the altar. When her cousin Jamie offers her the chance to cat sit MacGyver, the runaway bride leaps at the chance to cuddle up with the only male creature she trusts herself around. But MacGyver has other plans. He lures Briony to a friendly neighborhood retirement community–run by a charming young hottie named Nate. Briony and Nate hit it off instantly. But Briony’s still not sure she’s ready for a relationship. And Nate’s got problems of his own–someone is sabotaging his community.

Crazy humans. Why can’t they follow their instincts and go after the love they deserve? MacGyver is on the case. And this time, he’s not pussyfooting around . . .

The Secret Life of Mac by Melinda Metz is a rare inside glimpse to what our cats think of us, humans. The story switches point of views but is mostly from the cat’s perspective. I can hear Mac purring and wondering why the humans around him are upset. Mac is one interesting kitty. He loves so easily. Instantly, he takes to the new human. His goal is to help her not feel sad anymore. And Mac is up to his detective and matchmaking skills once again.

Melinda Metz’s writing brings a lot of humor. It was definitely a heart melter. I love animals and Mac caught my heart from the beginning. This cat is like any other cat. Always getting into trouble,  constantly wanting his food, and wants attention from his humans…but Mac is also a trouble kitty. He gets into everything. However, I think his nose and instincts are right on target. Overall, I loved this book.