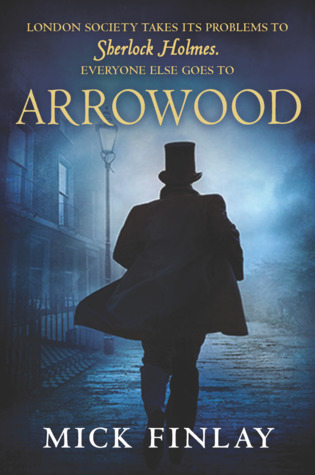 London Society takes their problems to Sherlock Holmes. Everyone else goes to Arrowood.

The Afghan War is over and a deal with the Irish appears to have brought an end to sectarian violence, but Britain’s position in the world is uncertain and the gap between rich and poor is widening. London is a place where the wealthy party while the underclass are tempted into lives of crime, drugs and prostitution. A serial killer stalks the streets. Politicians are embroiled in financial and sexual scandals. The year is 1895.

The police don’t have the resources to deal with everything that goes on in the capital. The rich turn to a celebrated private detective when they need help: Sherlock Holmes. But in densely populated south London, where the crimes are sleazier and Holmes rarely visits, people turn to Arrowood, a private investigator who despises Holmes, his wealthy clientele and his showy forensic approach to crime. Arrowood understands people, not clues.

Arrowood by Mick Finlay is  better than any Sherlock Holmes novel. It is more realistic. A detective that is more human. He’s also more willing to take on more cases than society’s famous  Sherlock Holmes. There’s this deep connection that made me pull further into Detective Arrowood’s current case. He is different than the average detective. He has the air of a professional and easily emotional. His assistant Barnett is another wonderful character. I liked this man. His appears to be the narrator of the story. His point of view makes things more interesting.

There are moments when the plot slows down almost to a halt but then picks up some speed again. I had to tell myself not to skip those parts and keep reading. It was well worth reading this book. The sense of danger was constant. The high stakes that were involved were cert of known beforehand but quickly escalated in the end. Overall, I highly recommend this mysterious yet deadly novel to all.