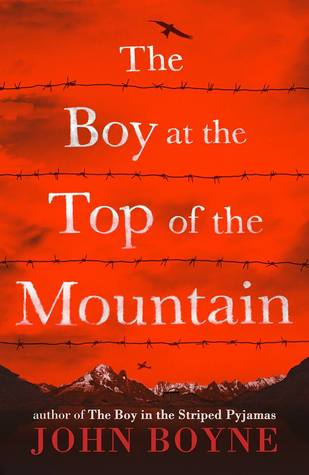 When Pierrot becomes an orphan, he must leave his home in Paris for a new life with his Aunt Beatrix, a servant in a wealthy household at the top of the German mountains. But this is no ordinary time, for it is 1935 and the Second World War is fast approaching; and this is no ordinary house, for this is the Berghof, the home of Adolf Hitler.

Quickly, Pierrot is taken under Hitler’s wing, and is thrown into an increasingly dangerous new world: a world of terror, secrets and betrayal, from which he may never be able to escape.

The Boy at the Top of the Mountain by John Boyne is a heartbreaking novel of loss, grief, and betrayal. A young German boy learns of heartbreak and friendship. But soon his innocence is lost and he turns over those he once loved. Friends and family have died at the hands of this German boy. He even went as far as to cause one woman to hate him for life. His actions cause him great pain and sorrow. One lonely journey he may never escape from…

I found this novel realistic. It showed what can happen to even the most innocent of souls. Dark times can change even those we knew. This story showed how one boy forever changed into the monster he is now. All he has are those dark endless memories caused by himself. He hurt and betrayed those who trusted him most. And that in itself is the worst pain a boy now man is left to live with…

Overall, I recommend this historical fiction novel to all. I am a huge fan of Holocaust stories both of those who helped make it worse and those of the survivors. There are so many things to learn from their journeys. The emotional tug of war from the book, made it impossible to put down.