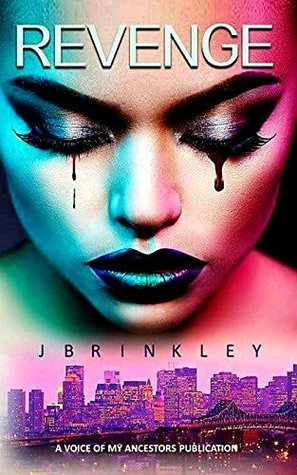 Novels like Gone Girl and Wild portray women who are real, haunted and mostly human. Women can be nurturing, loving and a total giver although they get little to nothing and even abuses in return. Yet, there is a point where everything good ruptures and is replaced by a strong sense of giving back the pain inflicted on them to the inflictor, particularly in conjugal relationships.

“Revenge,” a novel written by Jonas Brinkley aka J. Brinkley depicts how a woman who remained firm in loving and sticking with a man through thick and thin finally reaches the breaking point and decides to let vengeance consume her. The urban, women fiction novel starts in a college love setting where Brooklyn Taylor falls for Tyrell, her college mate. Tyrell is involved in unsavory activities and Brooklyn’s entreats for him to pull back fall on deaf years. When she gets pregnant with Tyrell’s child, her elation is short-lived as Tyrell is hauled up to prison.

Brooklyn gathers herself up, defies her family and friends’ impression on Tyrell and decides to stand by him while seeking God’s grace to turn him around. Brooklyn gets a job and raises her daughter and Tyrell becomes insecure when he learns about Brooklyn’s newfound freedom. Upon his release from prison, all of his insecurity falls on Brooklyn in the form of physical abuse.

In one particularly violent episode, Brooklyn ends up in the hospital and as bitterness towards the man she so loved overcomes her, she moots revenge.J. Brinkley has written “Revenge” from  a feminist and humanist angle – a woman has all the negative emotions a man has because all emotions are human. Social conditioning and stereotyping do influence the actions of women and men but at the end of the day, the flawed human being in them prevails.

“Revenge” has all the elements of what makes a riveting and engaging novel. J. Brinkley’s novelist acumen shines through in every page of “Revenge”.

Currently an independent author, Jonas Brinkley was born in Georgia and was raised by his mother in Tift County. His writing talent manifested from his teen years and by the encouragement from his relatives and friends, he developed it by taking the relevant college courses that honed not only his writing skills but also knowledge on various fields like theosophy and business. He founded (Voice of My Ancestors) Voma Publications LLC. J. Brinkley’s unconventional philosophies about life and love are a gift that ought to be shared with the world via writing.

Baltimore college student, Brooklyn Taylor finds herself falling in love with a student who loves the streets more than anything else. Brooklyn begs Tyrell to change his lifestyle, but the more she pleads, the more distant he becomes. When Brooklyn discovers she is pregnant she is elated, but it quickly turns to devastation when she finds out her child’s father is on his way to prison. Brooklyn begins to question her love for Tyrell and her future with him. When she makes the decision to stand by him no matter what her friends and family think of him, she prays endlessly to God that he will change his ways. Brooklyn gives birth to their daughter and takes on another job to earn extra money while Tyrell is serving time. He learns about her new job and becomes insecure and abusive upon his release from prison. The last physical altercation they have lands Brooklyn in the hospital where her internalized pain turns into deep-seated resentment towards Tyrell. As she lies in the hospital bed letting her physical wounds heal, her deep emotional scars remain. All she can think of is sweet revenge.

You can reach the author in the following ways: