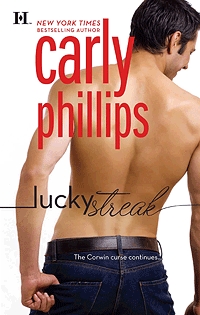 When Mike Corwin awakens after some wild partying in Vegas $150,000 richer and married to Amber, the gorgeous woman he met the night before, he thinks he’s hit the jackpot. The bad news is that Amber’s a con who takes his money and runs. Seems the family curse has finally hit him. Hard.

But to Amber, Mike isn’t business as usual. If only she didn’t need the money to ensure her father’s safety, she might actually have fallen for the intense lawman. Instead, she’s forced to betray him.

Now Mike’s hell-bent on divorce and Amber’s on the run… but when a twist of fate reunites them, can they turn their run of bad fortune into a lucky streak?

Lucky Streak by Carly Phillips is a hot sensational read. It has taken me hostage and I enjoyed every moment of it. The pages were filled with steam, humor, and an intense air like no other book. I felt the raw chemistry between Amber and Mike since the moment he rescued her. Their love hit them hard and fast. But neither of them could deny what they were feeling. However, that happy moment was short lived due to a new enemy. One that has been targeting Amber since she declined being with him. He had her followed and they money that she and Mike won was stolen. Mike woke up thinking the worst. Amber left. And so was his portion of their money. He went from feeling like they could make anything work to realizing nothing lasts, especially in his family.

Carly Phillips brought the sparkly life of Las Vegas to life. I felt the thrill and risks of that kind of high living. Only more people tend to lose out than win. Detective Mike is a good man not intending to fall in love. His family has a ‘curse’. To beat it, he stays single. But with Amber he wants a life with her. She has the power of making him laugh and feel good. Amber has a dad with Alzheimer’s disease. She went into the con artist life to keep her dad in the nice home. However, she wants out of the life. Yet her partner won’t let her. Danger, risks, and love are mixed into a drool worthy read. Lucky Streak is the most charming romance I’ve read.