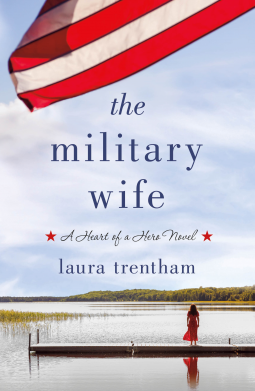 A young widow embraces a second chance at life when she reconnects with those who understand the sacrifices made by American soldiers and their families in award-winning author Laura Trentham’s The Military Wife.

Harper Lee Wilcox has been marking time in her hometown of Kitty Hawk, North Carolina since her husband, Noah Wilcox’s death, nearly five years earlier. With her son Ben turning five and living at home with her mother, Harper fights a growing restlessness, worried that moving on means leaving the memory of her husband behind.

Her best friend, Allison Teague, is dealing with struggles of her own. Her husband, a former SEAL that served with Noah, was injured while deployed and has come home physically healed but fighting PTSD. With three children underfoot and unable to help her husband, Allison is at her wit’s end.

In an effort to re-energize her own life, Harper sees an opportunity to help not only Allison but a network of other military wives eager to support her idea of starting a string of coffee houses close to military bases around the country.

In her pursuit of her dream, Harper crosses paths with Bennett Caldwell, Noah’s best friend and SEAL brother. A man who has a promise to keep, entangling their lives in ways neither of them can foresee. As her business grows so does an unexpected relationship with Bennett. Can Harper let go of her grief and build a future with Bennett even as the man they both loved haunts their pasts?

The Military Wife by Laura Trentham is an emotionally charged book that grabbed me from the get go. I couldn’t stop crying nor loving the main protagonists. Their troubles were intertwined in more ways than one. Grief and loss, has a way of connecting people together when they least expect it. Laura Trentham showed readers what it meant and how difficult it was to be a military wife. It made me think of the women who journeyed to the wild west with their husbands hoping to make their future successful. Trouble followed those women and these featured here.

Themes of sacrifice were not only seen but felt in this novel. Laura Trentham has a way of showing readers what life is like for those in the military and those married to military men. Hardships such as losing their husbands was a pain that pierced not only their hearts but mine too. It was like being there in person as they struggled to move forward.. Memories of loved ones brought both joy and sadness to those still living. Harper was a strong leading female character. Even though she was still suffering, she helped those around her who were suffering too. It takes more strength to do that. She was more than a likable character. And then there was Bennett. He too, has his own troubles. Burdens that weighed just as heavy if not more than Harper’s. Losing a fellow brother in the military is never easy. Overall, I highly recommend this heartfelt engaging tale of sacrifice and love to all readers.

2 thoughts on “Review: The Military Wife”