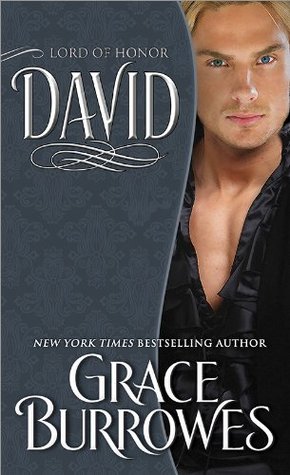 Letty Banks is a reluctant courtesan, keeping a terrible secret that brought her, a vicar’s daughter, to a life of vice. While becoming madam of Viscount Fairly’s high-class brothel is an absolute financial necessity, Letty refuses to become David’s mistress-though their attraction becomes harder to resist the more she learns about the man…

Perhaps a fallen woman can redeem it.

David is smitten not only with Letty’s beauty, but also with her calm, her kindness, her quiet. David is determined to put respectability back in her grasp, even if that means uncovering the secrets Letty works so hard to keep hidden-secrets that could take her away from him forever…

David: Lord of Honor by Grace Burrowes is a slow burning read. The characters get themselves into a lot of mischief. Like all Lords during this time period, Lord David is no exception when it comes to impropriety. He lusts after a woman who doesn’t throw herself at him. But small heated kisses soon lead to hot moments alone in bed. David does mean well. He wants Lady Letty to be treated with respect, care, and love. At first he also does not want to be her protector. That direct role lands itself upon him the more he knows and the more time he spends with Letty.

Lady Letty was once a woman of title, but now reduced to a woman struggling to survive. She only blames herself. Letty doesn’t want to set herself up for heartbreak. With a man and Lord like David, that possibility grows larger with each day. He is tender, all knowing, and all male. Letty feels her heart slipping away slowly to the man she can’t have.

Secrets, scandals, lust, and love are met in this novel. A historical journey that took me back in time. I understood the way Letty felt about herself. Her mistakes have landed her where she is at. And David seems to put himself in charge of taking care of her. Or else no one will. A damsel in distress and a man smitten with a woman who denies herself pleasures of the world. Overall, it was entertaining read. Steady paced with a dash of humor, Grace Burrowes has once again hooked me.