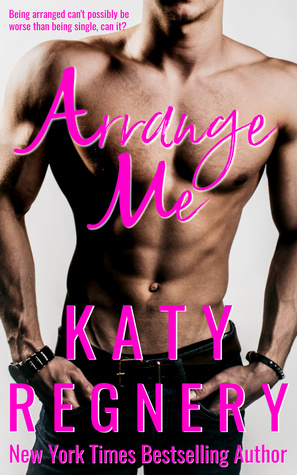 Synopsis:
My name is Courtney Jane Salinger…
and I’m sick of games.

Sick of the Friday night bar-scene-cum-meat-market.

Sick of awful dates and one-night stands, booty calls and guys who don’t call back, mixed messages or NO messages and—and—and…I’m sick of all of it.

I’m done.
I just can’t do it anymore.
It’s too hard, and worse: little by little, it’s making me hard.
It’s breaking my heart.

What do I want?
That’s easy.

I want a house in suburbia with a white picket fence.
I want babies to buckle into a minivan.
But most of all, I want to be married.
I want a husband.

So I’ve made an important decision: I’m making my escape from the dating world and the single life.
I’ve filled out my application on ArrangeMe.com and I’m putting my fate into the hands of experts.

Is it a little scary?
Sure.
I mean, I have no idea who I’ll end up with.
After all, I’m planning to marry a complete stranger.

But between you and me?
I can’t wait.

Being arranged can’t possibly be worse than being single.
Can it? 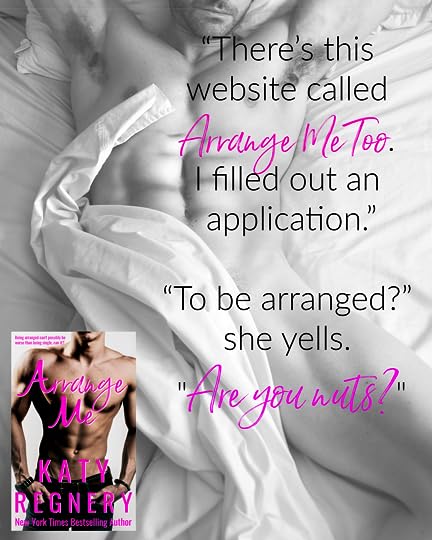 Arrange Me by Katy Regnery is a fun, romantic, fairytale like novella. I liked how marriage was portrayed as something wanted, desired, and serious. Yet, it seemed neither main character really took that seriousness to their own love life. Half-hearted attempts that landed them with more distance than passion. There was a pulling sensation towards the characters were they liked each other enough. But it wasn’t epic. I did not feel that lure of desire burn within them. It felt faint at times. The direction that the heroine took to get married was dramatic. Reminded me of Gossip Girl. Heat, romance, and some intrigue were created by this writer. The beginning had a way of making me want to read the book. I was surprised but entertained. The middle left me guessing which way the book would end. Arrange marriages is the central theme. I felt the fear and determination coming from the bride to be. To feel those emotions radiating from the characters made this a good book. Not the best romance, but I would still recommend reading it. It was different than most books.