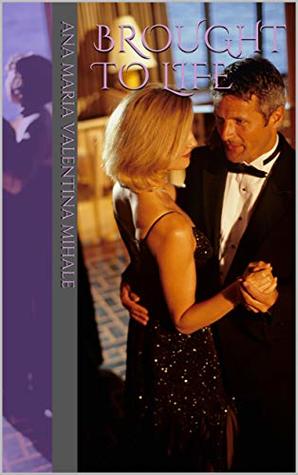 When Nicholas Ricola shoots himself, he doesn’t expect to come back from the dead. Now that he’s back, he has no one else in the world to turn to other than Anabella Anastasia Adair; the young woman who “had annoyed” him in college. Nicholas’s return is a little twisted. God’s way to make things better.

Brought to Life by Ana Maria Valentina Mihale is an interesting novella. It combines both contemporary and paranormal themes. Creating a strange twist to the tale, this writer’s talent to gain my attention was won. I couldn’t help but to wonder how funny if the main character’s irritable annoyance came true. God playing a trick or was he simply helping the characters?

At first, I hated Nicholas. He was very much a true jerk in every way. He was distanced from women except to bed them. But he wanted nothing more from them. For women gave him a headache. Then, there’s the other character, Anabella. She annoyed the hell out of Nicholas. I think inside, Nicholas was really attracted to her but couldn’t admit it. Anabella was a one I felt an instant sense of sympathy for. She had a way of making me like her more and more.

The story was entertaining. However, it jumped quickly into scenes that I was completely unprepared for. There he was making love to a woman and next thing, I know the man was died and witnessing his funeral. It gave a Christmas Carol vibe. I loved it. But just needed less of a quick jump into scenes like that. Overall, this is one fantasy romance tale I would recommend to all.