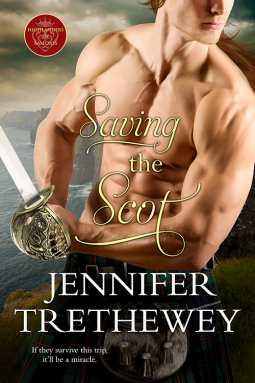 Louisa Robertson’s father is furious when he finds her acting on stage. Now, she’s being shipped off to America to marry some stranger her father thinks will bring out the “lady” in her. Luckily, Louisa’s maid agrees to switch places with her! Her maid will marry the American and get the wealthy lifestyle she’s always wanted, and Louisa can do whatever she damn well pleases––for the first time in her life.

Highlander Ian Sinclair needs an army commission, and the only way he can get one is to safely deliver the general’s Daughter-from-Hell to her intended in America. Easy, right? It would be if the lady’s companion Louisa didn’t wear breeches and do everything the exact opposite of what he orders. It’ll be a miracle if the sparks flying between Ian and Louisa don’t set the bloody ship afire before they arrive in America.

But just when Louisa thinks her plan is going to give her the acting career she wants and a Highlander to boot…Ian discovers her secret.

Saving the Scot by Jennifer Trethewey was a unique twist to both the time period and to the characters. Each protagonist complimented what the other one lacked. It felt so right that they were paired together. Their destinies were forced but each one made it to where they belonged. I could not stop laughing.

The heroine was a breath of fresh air. Her fowl words at times and her personality shined like bright stars in a dark sky. She was bold when it came to running away from her dad and the prospect of marriage. A career in theater was what she had wanted. Until she figured out, that it’s not all it was cracked up to be. But until she discovered that, she is one determined mess insisting on doing it all.

Their actions have consequences for all involved. Her lovely woman companion is her best friend. Both scheme together to get what they want. However, their lies finally catch up and then it’s an emotional mess. I was not sure where the plot was headed. Jennifer Tretheway, never disappointed me. I was intrigued, entertained, and lost within her creative yet charming world.of fiction.

Men can be stupid at times. It takes a good woman to show them what they’ve been missing and what they needed. Louisa was that woman for her ship captain. The Scottish characters made this enjoyable. Louisa went beyond all other heroines. Both intellectually and emotionally, Lousia was the star. She gave so much to those she cared about. The sea captian was also, a knight in shinning armour. Overall, I could not stop reading this book.