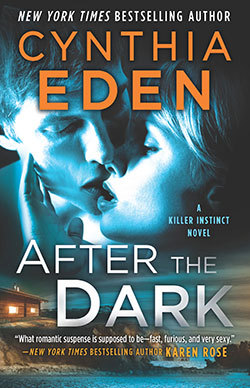 In New York Times bestselling author Cynthia Eden’s gripping new series, a disgraced FBI profiler must save her reputation by stopping a sadistic killer she knows all too well.

Former FBI agent Samantha Dark was one of the most respected profilers in the bureau, an expert on the twisted minds and dark hearts of the most depraved criminals. But when her own former lover turned out to be the serial killer she was hunting, Samantha’s career was destroyed. Blamed for the FBI’s failure on the complex case, Samantha fled Washington, DC, for the quiet anonymity of Alabama.

Now an all-too-familiar killer is hunting once again. She can catch the sadistic assassin, but that means putting her trust in her former partner, Blake Gamble. Ex-military, Blake is tough, protective, precise. With her entire life on the brink, she knows he wants her back in the FBI…and possibly more.

But someone else wants her, too. A threat is waiting in the dark, a killer who has set his sights on the ultimate trophy victim—Samantha.

After the Dark by Cynthia Eden is a dark intense read. From the first few pages, Cynthia Eden had my heart racing. I thought the female agent, Sam, would die soon. The writer wasted no time, in connecting me immediately to the story.

The characters and settings were quickly introduced. The rest unfolded easily. After the Dark sent goosebumps to my arms. I was on the edge of my seat waiting for the final moment…one or more were going to die before it was solved. I just wasn’t sure who nor when. The suspense and intrigue  were woven beautifully. Fear was rampant in this book. Death loomed over the characters. The leading female agent even has her own secrets that nobody else knows about except for her deranged ex-lover slash ex-friend. He was the only one who knew her. The only one who understood her. But now, it was like they were complete strangers. Neither one really knew the other.

Life and death hung in the air. The drama, danger, and risks between the characters felt so real. I could not stop reading this novel. I had to know what happened, why, and what was going to be the end result. Overall, I would highly recommend this dark exciting book to all readers.