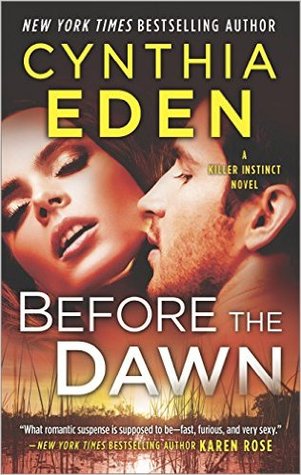 Ex-SEAL Tucker Frost knows that the world is full of evil. He saw it in the face of his own brother, Jason Frost, a cold, methodical, sadistic killer. A killer Tucker put down with his own hands in order to save Jason’s final victim–Dawn Alexander, the only girl who got away from the infamous “Iceman.”

It’s Tucker’s up close and personal experience with evil that’s made him perfect for Samantha Dark’s experimental profiling division in the FBI. And when women start turning up murdered with the same MO used by the Iceman, Tucker is sent back to Louisiana to investigate.

Seven years have passed since the night that Tucker faced down his brother…and since he last saw Dawn, his one-time lover. But as Tucker and Dawn grapple with a desire that never died, they must also face the shared shadow from their pasts. Both have the same question–has Jason Frost come back from the dead to hunt again? And this time, will he succeed in killing the victim who got away?

Before the Dawn by Cynthia Eden is an intense thriller. A brother’s disappointment and fear come alive in this book. Who knew that one’s own brother was like their sick father? A father who killed their mom, and tortured them as kids. Now, Tucker has to live with the fact his brother is also a sick serial killer. Kill his brother or let his only love die? Two of the toughest choices. But then again, Tucker’s brother made it for him the moment he went after Dawn.

Dawn loved Tucker. Always has and always will. But Tucker feels that his is just a reminder of his evil brother who almost killed her seven years ago. Now, Tucker and his FBI team have to find a serial killer copying off his brother’s moves. There too lies the question, could it be a copycat or did his brother survive the fatal shooting?

Spooky, heart-racing, and full of action, Cynthia Eden has once again, caught my full attention. This novel, made me sit on the edge of my seat waiting…for the big moment. And I was not disappointed. Overall, I recommend this romantic suspense tale to all readers.