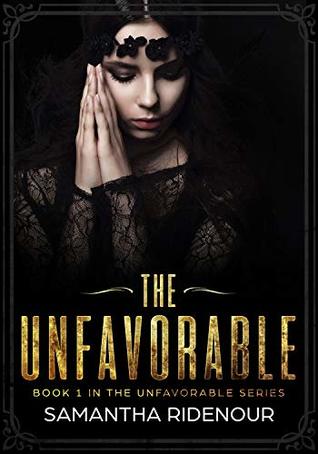 Alora is a young girl born into a divided society. Even her kind aren’t safe from its cruel rulers. After losing her brother, and her parents acting like nothing happened, it’s time for Alora to take the test. The Bleeding Rite. Fear mixed with curiosity, it is that day which changes her fate.

Alora takes her life into her own hands. She’s not your typical heroine who needs saving. Instead, she’s the one who can save all, including those she loves. But with her actions, comes one consequence after another when all she wants is to live a live that she gets to decide.

Danger, fear, love, and action are cleverly displayed in The Unfavorable. A place where even those deemed Favorable are no longer safe. Choices pop up and it will take everything this young girl has to fight those attempting to oppress her and those she loves. And the war is just beginning…

The Unfavorable by Sam Ridenour is a YA fantasy. One that explores family, sacrifices, love, and what it means to be human. Alora is a young girl who grew up in a society where sacrifices are an everyday occurrence. Many may be aware of the dangers to them but for the most part they play ignorant. Their ignorance is a disaster to their way of life. Families are torn apart to never see each other again. New families and friends form. Their past life almost forgotten. But not because they want to…

Alora is the wisest heroine I’ve met. Her determination has won me over and over again. She’s not afraid of going after what she wants. Now, whether her goal is to find more information or to find her lost brother, Alora takes immediate action. Her personality is also likable. She’s kind to everyone. However, mess with people and she won’t tolerate it. Alora is a fighter. Meaning she doesn’t need saving. She rescues others.

Despite all the action and dystopian like theme, there’s a bit of a romantic suspense inside here, too. Alora finds a guy her own age, on her way to exploring what her world was hiding from her. Alora doesn’t like secrets. Neither do I. It was hard not to laugh along. There were times, I cried and rooted for the characters. Especially, Alora. Her new friendship soon blossoms into an unexpected romance. I liked the guy. He was everything Alora wasn’t. Down to earth, more muscle, and he had a way of thinking things through that made him a character to watch out for. I won’t mention his name. That is for readers to dig into and discover for themselves.

The plot is well-written. Action and dialogue between the characters made it a quick read. Sam Ridenour has a way of capturing my attention. I am curious and to find out everything, I had to keep reading. Reading this novel was easy. So much to like. The bad characters were just as interesting as the good guys.

Overall, The Unfavorable by Sam Ridenour is a must read. It packs heat, intensity, and suspense all into one powerful tale. You’ll never know what to expect from page to page. And that is the best part. Nothing is predictable. This book is different because its emotional journey will tear you apart and rebuild you over and over again. I loved it.