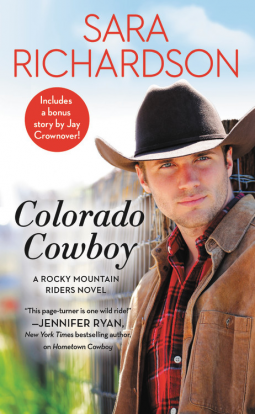 As a champion barrel racer, Charity Stone has learned to hold her own in the male-dominated rodeo world. There’s no cowboy she can’t handle…except for one. Officer Dev Jenkins has made it clear he doesn’t look at her like one of the guys. He’s caught her attention but Charity doesn’t do relationships–especially not with a cowboy. When she suddenly finds herself in charge of her thirteen-year-old nephew, who’s had a few brushes with the law, Charity has no choice but to ask for the deputy’s help.

Dev hasn’t stopped fantasizing about Charity since she moved to Topaz Falls, but she’s been hell bent on keeping her distance. When she comes to him for help with her nephew, he finally has the chance to make his move. Winning her over won’t be easy, though—especially when her nephew’s mistakes start to threaten his town. How can he do his job and still convince Charity he’s the cowboy for her?

Colorado Cowboy by Sara Richardson is a novel that heats up to a boil and leaves one wishing for me story. The cast of characters tugged at my heart strings all the way. Two women who grew up with a mother that lacked in parental sense. The sisters find themselves in trouble. Both had to grow up fast.

One has a tough trust no one act and the other sister lands herself into jail. Charity finds herself facing her past life. All those bad mistakes by her own mom leave her feeling hot with temper. But for good reason. Charity will also experience that power of love, hope, and forgiveness. Until then, she is dealt with a sister who drops off her now, thirteen year old nephew. A boy who said he didn’t remember her at all.

Immediately my heart broke for all the characters. Charity, her nephew Bodie, and her lover Dev, were the ones that captured my heart and soul. They made me want to keep on reading. I laughed, cried, and cheered for them as their troubles unfolded. Watching them break down and rebuild back up was beautiful. Overall, this was a well-written story. One that motivates and inspires to be the best one can be.