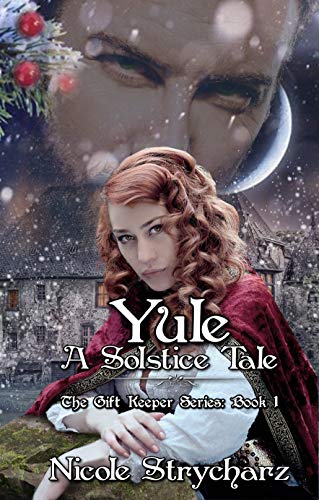 Shea Brogan the Earl of Glenn Haven has just returned from war. Rumors of his family’s ruin and roots in druidism have isolated him from society leaving Shea a recluse.

The solitude he has come to find comfort in, is disturbed when his estranged brother’s wife appears at his door in desperate need, his young nephew in tow. A boy that quickly becomes his uncle’s shadow.

As the winter solstice approaches, an attraction blossoms between Shea and his sister-in-law, but she has long lost her belief in love, magic, and the spirit of Yuletide.

Glenn Haven is steeped in mystical, age-old lore, and the rumors may ring with some truth, but magic must be believed to be seen… most of all, at Christmas.

***These books do contain some violence and mature sexual content best suited for readers 18 years and up. *Each book should be read in order. They are not standalones. The stories, though named after sabbats, are not in the order of their placement in the year. *Please note that the druid faith was only used as inspiration for this series. These books are a work of fiction and do not always accurately represent druid traditions and beliefs.***

Yule A Solstice Tale by Nicole Strycharz is a charming yet mysterious tale. It began with a sad introduction. One that had me feeling sympathy for a man who could have been happily married and chasing after his own kids. But instead, he is isolated inside his home away from people. The quietness has him feeling lonely until a surprise visit turns his life around.

A young woman has believed that Shea, the man she always loved, despised her. She was nothing but a commoner. Shea and his family were of elite members and to be married to one meant she would rise in ranks. I loved this woman for more than one reason. Despite her new position, she was left penniless by her husband. She worked hard to keep her and her son fed. This proved she was a strong character. Also, she was willing to work in exchange for a place to live with her son at Shea’s home.

Shea soon takes the role of Uncle to full heights. It made me laugh and applaud the characters. The more the story flew by, the more I fell in love. Nicole Strycharz has a way with words. Before you know it, you will be begging her for more! Overall, I highly recommend this short fantasy tale to all.