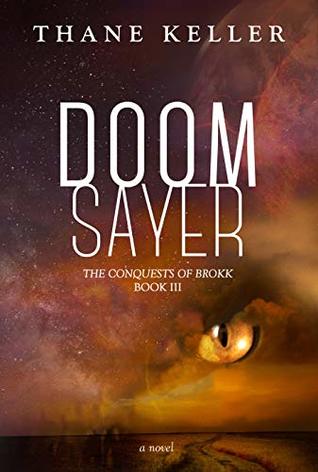 Brokk, Commander of the mighty Rogue Fleet, desires more than just his exile come to an end. His heart is set on revenge and his aim is to be the ruler of the Jark Empire. With his Armada resupplied and a powerful priestess at his side, Brokk intends to stop at nothing until his goals are achieved. Despite Brokk’s plans, Cale has his own intentions for the Galaxy and his own desire for revenge. As conflict descends on the Jark Empire, a fog of war masks the plans of the remaining species in the Galaxy and a battle for positioning begins.

Doomsayer by Thane Keller is an interesting multi-dimension story. It contains more than one plot which is why my rating is a 4.  Most of the plots were introduced but not fully developed. There were some that were complete. However, it left me wondering what Thane Keller’s plan was for those that were introduced. Revenge is a major theme found in this book. It works well for this genre. The writer captured it perfectly. But I didn’t appreciate religious attempts in this novel. Most books similar to this have some religious thing happening as well, but they didn’t make a mockery of religion. This story did. That was a turn off for me.

Doomsayer had some well-written parts. I loved that it was action-packed. There was always something happening to keep my undivided attention. It was also partially character driven. War, betrayal, revenge, and power are commonly found here. At times there was too much going on, but it was still entertaining to read. The second thing I loved most about this novel was the level of difficulty in situations. Characters had a lot on their shoulders. Risks, dangers, choices…that made it exciting. Overall, I say this was a good read. It could have been better in some areas. But the majority of it was just fine.