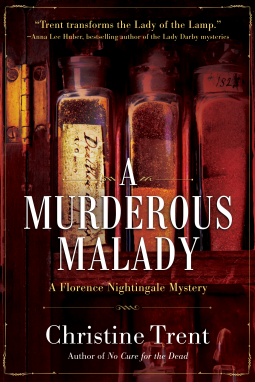 Cholera has broken out in London, but Florence Nightingale has bigger problems when people begin dying of a far more intentional cause—murder.

The London summer of 1854 is drawing to a close when a deadly outbreak of cholera grips the city. Florence Nightingale is back on the scene marshaling her nurses to help treat countless suffering patients at Middlesex Hospital as the disease tears through the Soho slums. But beyond the dangers of the disease, something even more evil is seeping through the ailing streets of London.

It begins with an attack on the carriage of Florence’s friend, Elizabeth Herbert, wife to Secretary at War Sidney Herbert. Florence survives, but her coachman does not. Within hours, Sidney’s valet stumbles into the hospital, mutters a few cryptic words about the attack, and promptly dies from cholera. Frantic that an assassin is stalking his wife, Sidney enlists Florence’s help, who accepts but has little to go on save for the valet’s last words and a curious set of dice in his jacket pocket. Soon, the suspects are piling up faster than cholera victims, as there seems to be no end to the number of people who bear a grudge against the Herbert household.

Now, Florence is in a race against time—not only to save the victims of a lethal disease, but to foil a murderer with a disturbingly sinister goal—inA Murderous Malady.

The Florence Nightingale Mystery series is awesome. I have read the first book and was hooked! This second novel, A Murderous Malady, was more intriguing. The guess-work was larger. So many suspects…and so little time. One murder after another, Florence is under high pressure to find the killer quietly. Her friend may be in danger. And as I read on, yes, her friend was indeed in danger. I never predicted who the killer was, until Florence revealed what she knew. That is one of the main reasons I loved this series. The writer, Christine Trent, is talented. The plot was juicy with gossip, ripe with suspicions, and packed with deadly intentions. Overall, I recommend this novel to all readers. Mystery and suspense, are definitely found here.