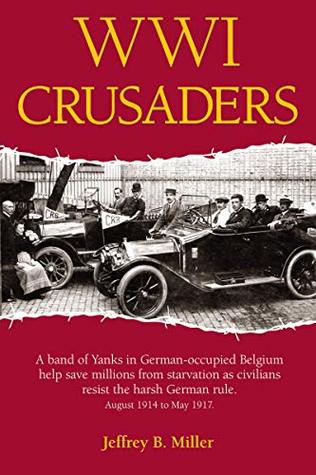 The true story of young, untested American volunteers who entered German-occupied Belgium to attempt what had never been done before — save an entire nation from starvation that was trapped in the middle of a world war. One of America’s greatest humanitarian efforts is little-known today. WWI Crusaders brings the past to life by telling the personal stories behind the facts in an as-it’s-happening style.

During WWI (1914-1918), the American-led Commission for Relief in Belgium (CRB) initiated, organized, and supervised the largest food relief program the world had ever seen. The CRB and its Belgian counterpart, the Comite National (CN), fed for four years nearly 10 million Belgians and northern French trapped behind German lines. The relief efforts faced huge logistical challenges, international intrigues, and internal conflicts between the leaders of the CRB and CN.

Young, idealistic Americans volunteered to go into German-occupied Belgium to guarantee the relief food would not be taken by the Germans. These humanitarian crusaders, known as CRB delegates, had to maintain strict neutrality as they watched the Belgians suffer under the harsh German regime. They also had to deal with a faction of Belgians who resented the Americans’ presence and tried to limit their authority.

WWI Crusaders is the first book for general readers that tells in one volume the interlacing stories of German brutality, Belgian resistance, and the young Americans who went into German-occupied Belgium. The situation in German-occupied Belgium during the war caused a tumbling together of extraordinary people into a chain reaction of life-and-death situations far from the trenches and killing fields of World War I. And hanging in the balance were millions of civilian lives.

Through lively personal stories, this nonfiction book follows a handful of young CRB delegates, a 22-year-old Belgian woman, two American diplomats, the leaders of a Belgian underground newspaper, and the founder of the CRB, who would become known to the world as the Great Humanitarian. His name was Herbert C. Hoover.

The book covers from the beginning of the war to May 1917, when the last Americans left Belgium because of America’s April entry into the war. An extensive epilogue wraps up all major stories and people through the end of the war and beyond.

It is a story that few have heard.

WWI Crusaders by Jeffrey B. Miller is an impressive historical collection of German occupied Belgium. It covers from August 1914 to May 1917. There was a lot of details, including photographs to reinforce the text. So much to read! I was excited. A terrible time of war on people of Belguim and those who fought to save them from Germans and the other bad powers. I felt like I was immediately transported back in time. The words came alive. Making me feel the worry, loss, and grief of those people.

Husbands, brothers, and sons taken away. So many killed, tortured, and barely any men were left to survive. Those taken were unlikely to ever make it back. Imagine being torn from your loved ones. Never knowing where or what will happen to them. The psychological, mental, and physical pain hit me hard. I could not relate to their tragedy nor to the loss of the Belgium people. My heart was broken for them all. Then there were the those like Great Britain, France, and Americans who lost many lives fighting to protect those in need of rescue. The damage was colossal. That happened so long ago, but I know to those affected, they can still feel the grief and loss that happened.

This book was a historical monument to those resisting the harsh German rule. Terror, fear, and death were everywhere. A journey that was educational, informative, and emotional. The writing was well-done. History was being relived. Most importantly, we should always remember no matter how traumatic, these events. Maybe, we can prevent wars like this from ever occurring again. Overall, I highly recommend this to all history bluffs, educators, and historical readers like me.