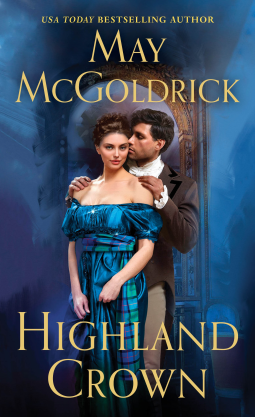 Scottish pride, persuasion, and passion—this is Highland romance at its breathtaking best.

Inverness, 1820
Perched on the North Sea, this port town—by turns legendary and mythological—is a place where Highland rebels and English authorities clash in a mortal struggle for survival and dominance. Among the fray is a lovely young widow who possesses rare and special gifts.

WANTED: Isabella Drummond
A true beauty and trained physician, Isabella has inspired longing and mystery—and fury—in a great many men. Hunted by both the British government and Scottish rebels, she came to the Highlands in search of survival. But a dying ship’s captain will steer her fate into even stormier waters. . .and her heart into flames.

FOUND: Cinaed Mackintosh
Cast from his home as a child, Cinaed is a fierce soul whose allegiance is only to himself. . . until Isabella saved his life—and added more risk to her own. Now, the only way Cinaed can keep her safe is to seek refuge at Dalmigavie Castle, the Mackintosh family seat. But when the scandalous truth of his past comes out, any chance of Cinaed having a bright future with Isabella is thrown into complete darkness. What will these two ill-fated lovers have to sacrifice to be together…for eternity?

Highland Crown by May McGoldrick is similar to Outlander, a Highlander romance. But unlike Outlander this one is better. It takes me back to just when the war and betrayal between Scots and Englishmen broke out. It was a time of death, destruction, and fear. Isabella is a strong female lead. She is intelligent and worried about getting her family to safety. Waiting for their time to travel out of the war country is suspenseful. The intrigue builds and so does the action. Then, enters another fabulous character. Cinead is a ship captain. He reminded me of a fish out of water. He has been on a ship so long that being stuck on dangerous land is a foreign and deadly thing. Both he and Isabella have a lot at risk and in common.

These pages flew by fast. I was quickly taken with the story. The characters set the tone and mood. It was like traveling back in time. May McGoldrick writes well. Her novel is visually enhancing and entertaining. So many twists and turns, to keep readers, like me, engaged. Overall, I recommend this novel to all readers.