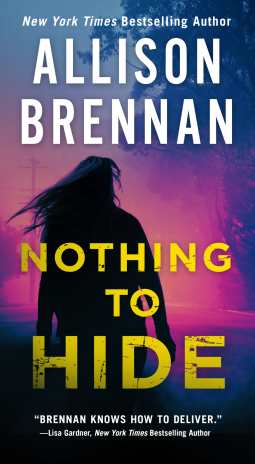 With a background in psychology, FBI Agent Lucy Kincaid is good at getting into the heads of killers and victims both. Still, her latest case is leaving her stumped. A third body has turned up in San Antonio—and it bears the same unique and troubling M.O. as the first two. The killer is clearly trying to send a message. But what is it—and to whom? All roads keep leading Lucy down a dead end. . .

The victims are all married men who led honest lives alongside their adoring wives, but have nothing else in common. When Lucy catches each widow in a lie, she realizes that things are not at all as they seem. What begins as a seemingly straightforward investigation turns into something far darker and more sinister than Lucy could have ever imagined. Can she solve this case before more lives are lost. . . including her own husband?

Nothing to Hide by Allison Brennan is mysterious thriller. One that led to four murders. But with each killing there is never any solid evidence that led the police officer nor his FBI partner to finding the killer. There’s only circumstantial evidence that kept on building up. Plus, there’s a witness. But even that might be let out of the courtroom due to the age of the witness. So much was riding on the evidence…they still have yet to find. Time isn’t on their hands. A killer is just about to get away with it all.

Allison Brennan had me on the edge of my seat. I kept waiting for the big moment. But the story just kept building into this tense break it or make it moment. Intriguing as hell. I could not stop reading. I had to know who it was and if their case would be solid enough. I also needed to know how the case played out between Jerry, the police officer, and his newbie FBI partner, Lucy. Lucy has the best sense for the criminal mind. She has this unexplainable hunch and it always leads to the right answer. But it’s a race against time in this deadly yet satisfying thriller. Overall, I do recommend this read. It was a bit slow, but it was worth digging into.