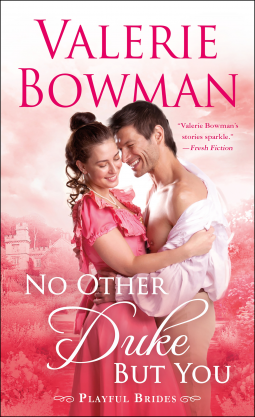 Lady Delilah Montebank has her marital sights set on the Duke of Branville. There’s just one problem: he barely knows she exists. But no matter, she’s got a plan to win him over with her charm, her wit—and perhaps the love potion she has in her possession wouldn’t hurt her cause…

Lord Thomas Hobbs, Duke of Huntley, thinks his best friend Delilah’s quest to become a duchess is ridiculous. He’s always said he’d rather give up all the brandy in London than commit to one person for life. Besides, he knows that Delilah’s love potion can’t possibly win over Branville…since she accidentally gave it to him instead. But perhaps this is the excuse he needs to show her he’s always loved her…

Delilah can’t believe she gave the potion to the wrong duke. Then again, Delilah could do a lot worse than win the hand of her handsome best friend. Could it be that the right duke has been before her eyes all along?

No Other Duke But You by Valerie Bowman is an entertaining romance. I was laughing and falling hard in love with these characters. The plot is driven by action, characters, and emotion. All three were well-done. Valerie Bowman’s novel was so easy to read, I got lost within the first few pages.

Inside this read, I found a young woman being abused by her mother. Lady Delilah is the type of woman who is full of life. She makes me laugh and smile throughout the book. Her clumsiness is cute. And her heart is made of gold. She is also a loyal person until you betray her trust. Lady Delilah has been told by both of her friends for years that her mother was hurting her and taking advantage of her. Yet Lady Delilah continued to believe the best of her mother. All she wanted was to impress her mother and not to be a disappointment.

Then, there’s her best friend, Thomas. He’s known as eligible bachelor, Duke of Huntley. His sister is a handful. And after years of being a disappointment to his father. Duke of Huntley knows exactly what Delilah is dealing with at home. His father made him feel like a failure. But then, Delilah made him feel like he was worthy of being a Duke. Her words of encouragement so long ago had changed him. He is now the man his father would have been proud of…a man he’s proud to be all because of her. Delilah is the only woman Thomas wants. But now, she has her sights on marrying a Duke, and he has to prove to her that he’s the only Duke for her.

Overall, I loved this story. Heartfelt, funny, and charming, these characters had me following every word. I would recommend it to all. It had the chemistry, the sparks, the friendship to lovers, and it so much humor.