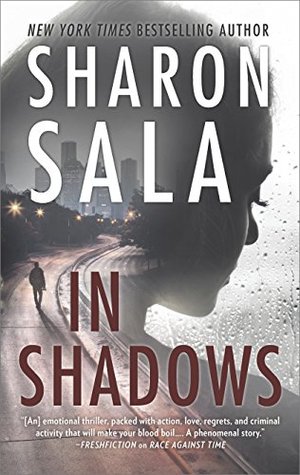 To protect her, he must remain a ghost…

Jack McCann has been in love with Shelly since they were teens. They married just out of college and right before he went to work as an undercover agent for the FBI. When he can, he slips away from his assignments to see her.

Jack has been undercover on his latest case for months, investigating a weapons-smuggling business. But just as the FBI is set to make the bust, Jack’s cover is blown. The last thing he feels as he crashes through a warehouse window and into the open water is a bullet piercing his back. The last thing he hears is Adam Wu promising to destroy everyone Jack loves.

Shelley’s worst nightmares come true when the FBI arrive at her doorstep to bring her the news. But she doesn’t know the truth: Jack survived the shooting and will do anything to keep his beloved wife safe—even if it means hiding in shadows…

In Shadows by Sharon Sala is one of the most intriguing dark suspense novels I have read. It held me at the edge of my seat all the way through. The risks were so high, I was not sure if the characters would make it to the ending. The mystery on whether the main protagonist had died or lived was well-done. The other characters did not know for sure until they saw or were told he had survived or not. A deadly crime gone haywire, led to FBI agent, Jack and his wife to danger. Neither one will be prepared for what has has happened. Nor did Jack suspect a traitor from his side of the law to betray him in such a way. Death loomed over the characters. Their struggles were realistic. I could not help but to feel like I was struggling alone with them. The scenes were vivid and sensual. I loved the connection between the husband and wife. A love that pulled through despite the dangerous situations, kept me cheering for them. The pacing was decent. It sped up more by the time Jack was thought to be dead or alive. He was seen to be shot and taken a deep fall into water. No body, meant there was a possibility but that also meant collateral damage for the crime family. Revenge is scary but when you cross the good guys, it takes it to a whole new level. Overall, I found this novel very interesting and recommend to all.