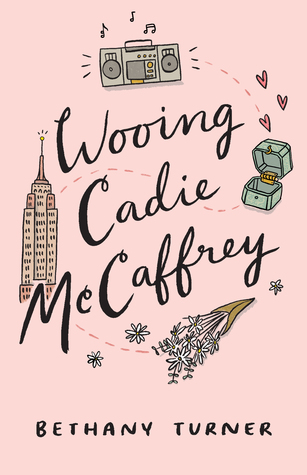 After four years with her boyfriend, Cadie McCaffrey is thinking of ending things. Convinced Will doesn’t love her in the “forever” way she loves him, Cadie believes it’s time for her to let him go before life passes her by. When a misunderstanding leads to a mistake, leaving her hurt, disappointed, and full of regret, she finally sends him packing.

But for Will, the end of their relationship is only the beginning of his quest to figure out how to be the man Cadie wanted him to be. With the dubious guidance of his former pro-athlete work friends and tactics drawn from Cadie’s favorite romantic comedies, Will attempts to win her back. It’s a foolproof plan. What could possibly go wrong?

Bethany Turner is back with more of the heart and humor readers love. Anyone who enjoys a good romance or binges romantic comedies on Netflix will devour this delightful story.

Wooing Cadie McCaffrey by Bethany Turner is one of the the most romantic contemporary novels I have read. The main character instantly grabs my attention when she started speaking about Jane Austen and the other great writers. I felt connected to Cadie McCaffrey. Her bubbly personality and the way she handles her coworkers is hilarious and sweet. I could not get enough of this story.

Just when this woman believes there is no man out there for her, one pops up. He fits all the boxes. But just when he mentions sports she feels a disconnection. However, with a grin on his face, he elaborates and she’s smitten all over again. The spark and humor are there. Now, it’s a matter of waiting. Their relationship grew quickly.

I liked how Bethany Turner did not waste time in setting the characters together. Just because everything started out well, doesn’t mean it will work or that it won’t work. The mystery of whether they would or wouldn’t kept me in suspense until the last page. There was a bit of intrigue, a ton of laugh-out-loud moments, and moments were I wanted to hug the characters. The emotional journey was beautifully planned. I felt it all. So realistic…so good. This is one romance I recommend to all.