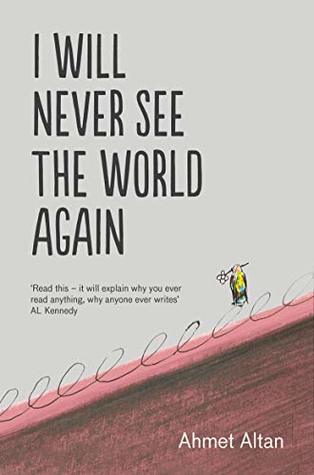 The destiny I put down in my novel has become mine. I am now under arrest like the hero I created years ago. I await the decision that will determine my future, just as he awaited his. I am unaware of my destiny, which has perhaps already been decided, just as he was unaware of his. I suffer the pathetic torment of profound helplessness, just as he did.

Like a cursed oracle, I foresaw my future years ago not knowing that it was my own.

Confined in a cell four metres long, imprisoned on absurd, Kafkaesque charges, novelist Ahmet Altan is one of many writers persecuted by Recep Tayyip Erdogan’s oppressive regime. In this extraordinary memoir, written from his prison cell, Altan reflects upon his sentence, on a life whittled down to a courtyard covered by bars, and on the hope and solace a writer’s mind can provide, even in the darkest places.

I Will Never See the World Again is one of the most interesting memoirs I have read. A man has gone from his world of writing to being imprisoned for helping a rebellion against the government. This is a journey to open up the eyes of those worldwide. It shows how the government can quickly imprison writers and how they think they can quiten their voices. The writer, Altan, has written his tale in a way that had me hooked. Most memoirs are dull, full of fluff, or too boring to read. Yet this one, captivated my full-attention. It also shows how fast one’s freedom can be taken. This book, made me realized just how much my freedom to express myself is worth. Until it’s taken, like with Altan, one needs to appreciate what that freedom and hold onto it for as long as possible. Overall, it was a quick yet educated read. I recommend it to all readers.