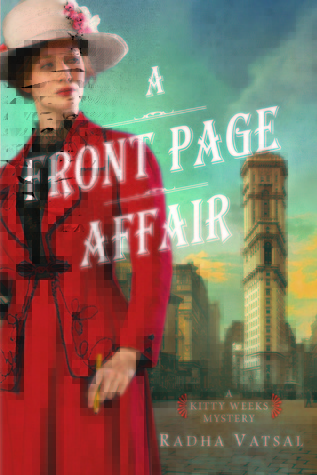 The Lusitania has just been sunk, and headlines about a shooting at J.P. Morgan’s mansion and the Great War are splashed across the front page of every newspaper. Capability “Kitty” Weeks would love nothing more than to report on the news of the day, but she’s stuck writing about fashion and society gossip over on the Ladies’ Page-until a man is murdered at a high society picnic on her beat.

Determined to prove her worth as a journalist, Kitty finds herself plunged into the midst of a wartime conspiracy that threatens to derail the United States’ attempt to remain neutral-and to disrupt the privileged life she has always known.

A Front Page Affair by Radha Vatsal is an engaging historical mystery. It’s about a female journalist wanting to make the front page. But it seems most of the big time stories have already been printed by others. Then, life changes. Kitty is determined to prove herself as a journalist. But what she didn’t expect was for a murder mystery to occur so soon and to be so involved. This story was her chance at her dream career. I enjoyed following Kitty as she dug further into the murder investigation. She is a strong and clever character. Kitty has a way of pulling me into her life story. A character who takes risks and jumps right into action is my kind of heroine. I was deeply entertained with the history, espionage, and war parts of the plot. I am a huge history fan so this was definitely my kind of read. Overall, A Front Page Affair is a great start to a new mystery  slash historical series.