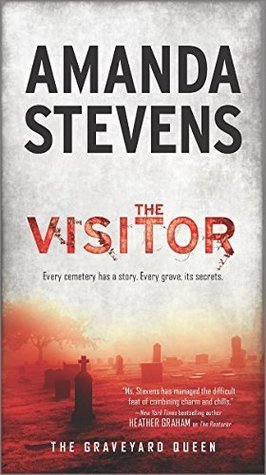 My name is Amelia Gray. I’m the Graveyard Queen.

Restoring lost and abandoned cemeteries is my profession, but I’m starting to believe that my true calling is deciphering the riddles of the dead. Legend has it that Kroll Cemetery is a puzzle no one has ever been able to solve. For over half a century, the answer has remained hidden within the strange headstone inscriptions and intricate engravings. Because uncovering the mystery of that tiny, remote graveyard may come at a terrible price.

Years after their mass death, Ezra Kroll’s disciples lie unquiet, their tormented souls trapped within the walls of Kroll Cemetery, waiting to be released by someone strong and clever enough to solve the puzzle. For whatever reason, I’m being summoned to that graveyard by both the living and the dead. Every lead I follow, every clue I unravel brings me closer to an unlikely killer and to a destiny that will threaten my sanity and a future with my love, John Devlin.

The Visitor by Amanda Stevens is the next best adventure in this Graveyard Queen series. The Graveyard Queen, known as Amelia, is down to earth, brilliant, and easy to like. She has a way of getting people to like and hate her upon first meeting. The ones that hate her, are usually the bad ones. Or they are the stuck up snobs.

Amelia is from a line that is doomed by fate. Learning her family truths, Amelia knows something big will happen to her. I liked the building of this unforeseen event. As a reader, I know this intensity will continue until the last novel is here. Until then, each adventure like the one present in this novel, brings me closer to the heroine’s journey. Her designation.

Seeing, hearing, and feeling ghosts is just Amelia’s norm. She works on restoring graveyards to their truest form. I loved how the history and culture of each group of people from each graveyard site was explored. Every one of them had their deadly secrets, betrayal, and immediate danger to Amelia. Amelia isn’t scared. Instead she continues her work. She’s determined, strong, and caring.

Amanda Steven’s brings paranormal fantasy fiction to life. I enjoyed reading this story. The romance relationship between police detective, Devlin, and Amelia was also intense. They just escaped from danger and loss, to go through a separation of sorts. Danger lingered on every page. A ghost phantom haunting Amelia daily adds to the eerie atmosphere. My curiosity only grew with every page. There was plenty of mystery, intrigue, and humor to enjoy as well.