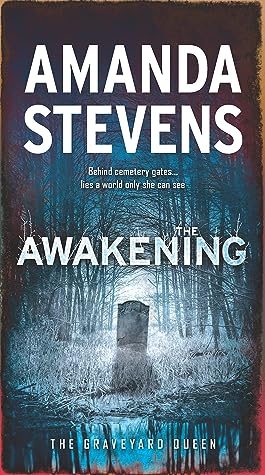 My name is Amelia Gray, and I’m a cemetery restorer who lives with the dead. An anonymous donor has hired me to restore Woodbine Cemetery, a place where the rich and powerful bury their secrets. Forty years ago, a child disappeared without a trace and now her ghost has awakened, demanding that I find out the truth about her death. Only I know that she was murdered. Only I can bring her killer to justice. But the clues that I follow–a haunting melody and an unnamed baby’s grave–lead me to a series of disturbing suspects.

For generations, The Devlins have been members of Charleston’s elite. John Devlin once turned his back on the traditions and expectations that came with his birthright, but now he has seemingly accepted his rightful place. His family’s secrets make him a questionable ally. When my investigation brings me to the gates of his family’s palatial home, I have to wonder if he is about to become my mortal enemy.

The Awakening by Amanda Stevens is a must read for all. The final outcome of The Graveyard Queen series. This book was bittersweet. Because I did not want the journey to end at all. I want to keep reading about Amelia and her lover, John Devlin. I was excited and not disappointed by this read.

Amanda Stevens’s books are addictive! I cannot get enough of this Graveyard Queen series. A woman who is titled the Graveyard Queen has the ability to see, hear, and feel ghosts. The ghosts are attracted to her for several reasons, one being that they need her help to solve their murder mystery. The other being that they are attracted to the light within her. Last, they know she is the passage to between veils. Amelia has had this ability since she was young girl. She is commonly known as a ghost seer.

In The Awakening, Amelia is restoring another graveyard. This one is more terrifying the the last one. This graveyard has starlings that are circling above Amelia and dropping dead. A death omen. Someone near and close to Amelia is about to die. This foreshadows another event and death that even Amelia isn’t aware of until it happens. John Devlin is again on stage but he and Amelia have a lot of intense moments. Neither of them can deny their attraction. But he plans to sacrifice himself to keep her safe and bring down a a deadly organization that could kill Amelia if they ever find her. Amelia finds another ghost. This time, it does have a family link to her. Her aunt lost her only daughter and the father of the child is John Devlin’s conniving grandfather. The man hid the truth of the little girl’s death due to power threats to him. He cared more about his face than helping capture the killer of the little girl. Amelia seeks the truth to try and set the girl’s ghost free. In doing so, Amelia puts herself into the line of danger and possibly even her own death.

Amanda Stevens is a talented writer. She knows how to keep me guessing and on the edge of my seat with every book. I am in love with this series. I am hoping there will be more books added. Action, suspense, mystery, ghosts, power, death, and love are all included in this powerful story. I definitely recommend it to all romantic suspense and paranormal fantasy lovers.