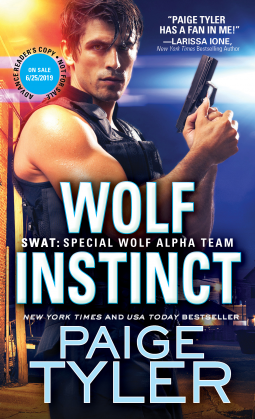 He’s a wolf shifter.
She hunts monsters.
How can she be The One for him?

SWAT werewolf Zane Kendrick will do whatever it takes to take down the man who attacked his pack. His search takes him to Los Angeles, but when he meets Alyssa, the smart, sexy agent who comes to his aid, he’s immediately interested in pursuing more than just the next lead. All his wolf instincts tell him that she’s The One.

FBI agent Alyssa Carson has investigated some weird stuff lately, and finding missing people drained of their blood definitely falls into that category. When following a clue leads her to Zane, she agrees to work with him and his team. She’s attracted to the gorgeous Brit, but she doesn’t have time for anything but finding answers.

When Zane and Alyssa discover the sinister truth, it’ll take everything they have to make it out of this mission with their lives—and hearts—intact.

Wolf Instinct by Paige Tyler is an exciting adventure. Full of paranormal beings, action, danger, and romance, Wolf Instinct gives readers exactly what they need. I felt the adrenaline pumping and the intensity of the situations as they continued to grow out of hand.  The characters were easy to like. Their own dilemmas plus, their current mission had me on the edge of my seat waiting. I had know what happened next.

This book was impossible to put down. I absolutely loved the atmosphere that Paige Tyler brilliantly created. The growing passion and the dialogue between SWAT member Zane and FBI Agent Alyssa, had me hooked. It was funny how they could easily communicate without words. Their bodies were so tuned into each other’s presence, neither one had to verbalize their words. There was a powerful connection that led to a make it or break it moment.

The truth found a way of coming out in the least likely of times. Their banters were heated. The FBI procedure and handling were done well. I liked the sense of mystery. It kept me guessing. Overall, Wolf Instinct is a must read for all romantic suspense readers.