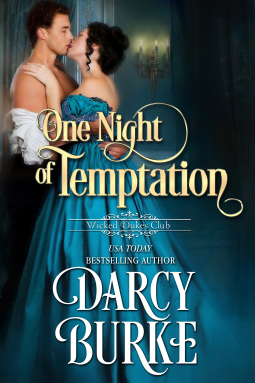 Faced with a marriage she can’t abide, Lady Penelope Wakefield takes drastic measures to preserve her freedom. Her brilliant plan is foolproof until a sexy but imperious rector “rescues” her.

Rector Hugh Tarleton has no patience for the Society philanthropists who seek to bestow their pity—and not much else—on his oppressed flock in one of London’s worst neighborhoods. When the daughter of a marquess is kidnapped and brought to the rookery, he vows to protect her, but the temptation to surrender to their mutual desire will certainly ruin them both.

One Night of Temptation by Darcy Burke is exactly that. A rector is faced with temptation after rescuing one of the wealthiest women. Lady Pen comes from a wealthy and powerful family. However, her stepmom is not a caring mother figure and neither his  her father a caring soul. Her father is pressuring her to marry a man old enough to be her grandpa just for money and connections. But things have a way of working out….it is just a matter of timing. Hugh can’t believe the gorgeous woman he rescued is different than the others he has been around. Lady Pen is not what other women from the ton are. She is only wanting a husband whom she loves and one that is kind. Hugh is looking for the same things but in a wife. The two feel a connection and are tempted beyond reason in this hot, scandalous, and dangerous read. I loved every moment. The characters felt so real. It was a s thought I have known them for years. The protagonists were enjoyable and easy to like. Overall, I recommend this historical romance to all.