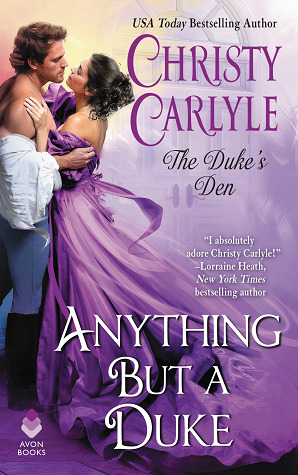 Self-made man Aidan Iverson has seen more closed doors in his thirty years than he’s ever cared to count. As a member of the elite Duke’s Den, he has all the money he could possibly need, but the one thing he can’t purchase is true power. If roguish Aidan can’t buy his way into society’s hallowed halls, he’ll resort to a more extreme measure: marriage.

Brought up to be a proper lady, the only thing Diana Ashby desires is to be left alone to the creation of her own devices. But when her dreams are crushed, she must find another way to secure the future of her invention. Knowing his desire to enter her world, Diana strikes a deal to arrange Aidan’s marriage to the perfect lady—as long as that lady isn’t her. She doesn’t need any distractions from her work, particularly of the sinfully handsome variety.

As Diana and Aidan set out to find him an aristocratic match, neither are prepared for the passion that ignites between them or the love they can’t ignore.

In the Duke’s Den, can happiness ever be a winning prospect?

Anything But a Duke by Christie Carlyle is one epic historical romance. It contains heat, intellect, and humor. The heady combination made my head spin. I am in love. This writer, Christie Carlyle, knows what readers want and expect to find in such a novel. She went beyond all that and more. Every scene was as visual and delightful as the one previous to it. I simply could not get enough of this book. The characters were easy to love. Passion, wants, needs, and bargains brought such fun entertainment unlike most novels. The beginning swept me deep into the tale. I could not put it down…

As with most novels there’s always what the ton aka society wants from the characters. The characters want differently than just wealth and connections. They need love, encouragement, friendship, and most of all companionship. They start off by thwarting the ton or going about following the ton’s rules. Sometimes, it works and sometimes it doesn’t.

A young beautiful woman has fallen into her late father’s footsteps. As an inventor and as a woman, finding investors  proves difficult. However, this determined woman already knows one of them in a more intimate way. She doesn’t want any investor. She only wants him.

A young man who is beyond wealthy still cant buy his way into society. He needs to marriage a woman of title. He makes a bargain with a female inventor. She also happened to save his life and brings his blood to life. Aidan wants only her. But she isn’t a titled woman. But he still wants her…