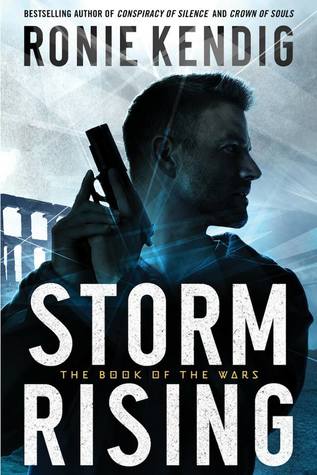 Once lost to history, the Book of the Wars has resurfaced, and its pages hold ancient secrets and dangers. Former Navy SEAL Leif Metcalfe has been tasked with capturing the ancient text, but a Bulgarian operative snatches it, determined to secure her freedom. When a series of strange storms erupt, they must form an alliance to thwart impending disaster.

Storm Rising by Ronie Kendig is a dark yet fast-paced thriller. It was everything I expected for a special military ops. I enjoyed the female character who not only kicked every male’s butt more than once, but also, how she kicked Leif’s butt multiple times. Leif has a background he doesn’t want exposed. Dark secrets surrounding the protagonists’ lives make for an interesting read. It made me wonder what is in his background file. As for the total ninja warrior female, Iskra, I felt sympathy for her. Themes of rape, bullying, physical and mental abuse were included in this plot. Iskra is a fighter. Leif acknowledges and appreciates that in her. He also wants to break down all her protective walls and fight her demons for her. An unlikely romance bubbles up and a crazy intense mission from hell keeps this cast of characters busy. Overall, I loved the action and suspense. I recommend it to all.