Life is short and the TBR pile is high, so if I get 50 pages in to a novel and don’t
care what happens next, I will abandon it without any scruples. And as a novelist
myself, I always ask the question: what will make my readers want to read on?
In the novels I love most, character comes first and plot second. Even in plot-
heavy crime novels, this is the case. I want to be intrigued by the main
protagonist, and feel that they are an authentic, living, breathing soul, and the
antithesis of clichéd. Only then can I engage in their struggle, whatever it may be.
So how do you create real characters? A creative writing teacher once told me to
interview them. Ask questions like “What is your star sign?” “Do you believe in
God?” “What is your earliest childhood memory?” But I found this just produced
a load of extraneous facts that cluttered my brain.

I asked my partner, who works in the film business, what tricks filmmakers use
to get audiences to care about characters. “Make them witty,” he said, “Or really
good at something. Or extremely sexually attractive. Or kind to animals.” I
particularly liked the animals tip, and in my first Romanovs novel, The Secret
Wife, I made my protagonist, Dmitri Malama, a dog lover. The historical evidence
was there: he had given his first love, Tatiana, a French bulldog as a gift, early in
their courtship. But looking back, it was more important that readers related to
Dmitri’s insecurities about the relationship with Tatiana, and the thoughtless
mistakes he made that led to tragedy, rather than his dog ownership.
I think the key for me lies in giving my characters some kind of vulnerability or
flaw that readers can (hopefully) empathize with. Because none of us is perfect.
This flaw should be crucial in the context of their story arc, whatever it may be
(solving a mystery/finding love against the odds/reuniting a fractured family
etc.). In the course of striving to meet their goal, they will develop and perhaps
(but not always) overcome their flaw.

The dilemma they face, which gives the novel its narrative drive, needn’t be huge.
Helga Flatland’s A Modern Family is about three grown-up siblings coming to
terms with their parents getting a divorce. That’s all. But it’s riveting, because the
characters are so convincing, we’re rooting for them from the start. It’s the same
with Anne Tyler novels, and anything by my heroine Barbara Kingsolver. It all
comes down to emotional honesty.

Sometimes, when I’m not satisfied with a scene I’ve written, I think “OK, now
make it real”. You have to dig deep, like a method actor, and find shards of truth
to illuminate your writing. I don’t directly describe personal experiences but if
I’m working on an old person’s death scene, I can instantly take a mental leap to
the long hours of sitting by my dad’s bedside as he slipped from the world. Or
when I’m writing about lost love, I can astral-project myself back to when I was a
teenager sitting huddled on the floor of a bedsit sobbing because my first love had broken up with me. All such moments contain nuggets of gold for the
novelist.

A trick I often use to aid authenticity is writing a scene in first person then
switching it back to third again. This usually helps to intensify emotion. Some
authors write their entire novel in first person. It’s a brave call, but fraught with
difficulties. Characters can end up sounding egocentric if you aren’t careful and,
on a sentence-by-sentence level, the number of ‘I’s and ‘my’s can sound clunky.
But switching from first to third always does interesting things for me.

I write about real historical characters, and in my research I try to find clues to
their psychology that give me an entry point into the story. When I was
researching Maria, third daughter of Tsar Nicholas, for my new novel The Lost
Daughter, I realised she suffered from ‘middle-child syndrome’. She was insecure
in her parents’ affections, often excluded by her two older and two younger
siblings, who teased her for being chubby and a little bit needy. This made her
seek friendship and affection elsewhere, and she befriended some of the guards
who were watching over the family in the house in Ekaterinburg where they
were held prisoner. Her need for love was the flaw, and it became critical in
determining her fate.

I don’t need to like characters I read and write about, but I do have to believe in
their humanity and realness. That’s what makes me intrigued to find out
whether they will achieve whatever it is they seek. And that’s what it takes for
me to invest the time it takes to reach that final page. 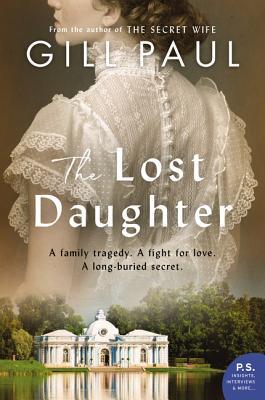