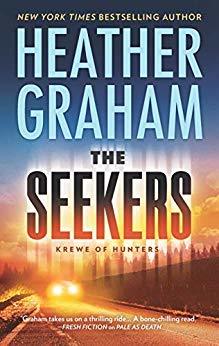 THE TRUTH IS SCARIER THAN FICTION

Keri Wolf has joined the crew of The Seekers, a show that searches for paranormal phenomena, as they explore a supposedly haunted old inn on the road between Philadelphia and Harrisburg. The place is famous for its warm welcome—and infamous for being the site of an ax murder rampage in the 1920s. They’ve barely begun when a very real dead body is discovered in the basement. As a nonfiction author, Keri is supposed to be the rational one, but she can’t explain a terrifying apparition that seems to be both a threat and a warning.

Former detective Joe Dunhill knows what she’s going through—the strange gift of being able to see and talk to the dead is a struggle he shares. A new member of the FBI’s Krewe of Hunters, he’s on the team investigating the disturbing death. The town is steeped in old-fashioned superstition, and the deeper Joe and Keri plunge into the dark secrets of the inn, the closer they get to a devastating truth. Will a bloody history be repeated? Or can the spirits of the past reach out to stop a killer?

The Seekers by Heather Graham is the 28th novel in the series. What I love about the books is that I could read them out of order and still fall along on what’s happening. The group of characters are mostly known as the Krewe of Hunters. A special division within the FBI. They handle bizarre and paranormal cases. Each member of this unit can see, hear, and interact with ghosts.

The Seekers is intense. It has the creepy factor all the way up. Suspense is felt throughout the book. The book closes in on the history of the haunted inn/tavern and of two protagonists. Both the FBI agent Joe and the historical writer Kerri are the central focus for this novel. Joe is ex-military and former police officer. After solving a case involving a dead man’s ghost, Joe has been accepted into the Krewe of Hunters division. He has to work as a consultant until he passes the academy. Kerri is well-known for her accurate historical facts and her books. She is told by her publicity agent to join the ghost hunters and Carl, the young actor who now owns the old inn in finding the history of the place. The publicity to help would make Kerri’s books sell more copies. She agrees. Only her, Carl, Joe and his FBI partner find more than they bargained for.

This plot is another challenge for this unit. An older member and a newbie are called in to investigate a murder. One that involves a dead FBI agent. But that isn’t the only thing about the case that has the Krewe of Hunters interested. The place where she was killed, is known for mass murder. Many have died in the tavern slash inn where the FBI agent was slaughtered. To make matters more creepy, a group of ghost haunters are filming the inn and tavern for any sightings of ghosts. They want to film but the Krewe Hunters unit is skeptical. They suspect the ghost hunters as well as many others. Overall, I highly recommend this thrilling novel to all readers.