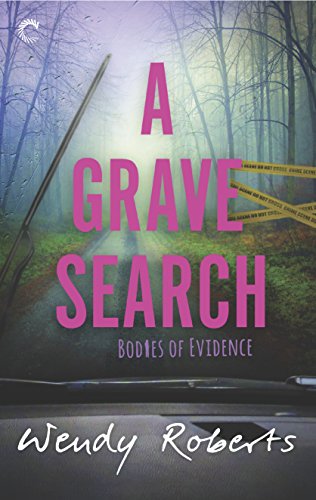 The crime scene is drenched with blood, but the body is nowhere to be found.

When a grieving mother requests Julie’s help tracking the body of her missing daughter, Julie is hesitant. Not only do the circumstances sound disturbing, the job is in her hometown, a place steeped in upsetting memories and unresolved trauma. But her interest is piqued, and she takes the case, knowing she’ll have the support of her FBI agent boyfriend along the way.

Soon, Julie finds herself exactly where she doesn’t want to be—trapped in the dangerous spotlight created to keep the story in the media. And as she digs deeper into the mystery of the young woman’s death, she uncovers secrets about her own past she thought were buried forever.

And don’t miss the first installment in the Bodies of Evidence series. A Grave Calling is available now from Wendy Roberts and Carina Press!

A Grave Search by Wendy Roberts was a great read. It had the paranormal theme that I loved so much. Murder, mystery, and romance all wrapped into one fabulous tale. Inside, I met a young woman that through a lot growing up. Her own mother left her, her grandmother was abusive and then there was her grandfather. Julie didn’t have a great upbringing. She managed to survive and life a good life. Now, she finds dead bodies for a living, lives with her rottweiler, Wookie. Then, there’s her sexy FBI agent boyfriend. He is super protective of his woman. At first, I felt how Julie hated it. She’s still worried about his over protectiveness a bit. However, her defenses around him shatter. Their chemistry is hot and instant. Julie can’t think straight when their close. This book, had me following Julie as she discovered more dead bodies and confronts her past. Overall, it was a fun read. I recommend it to all.