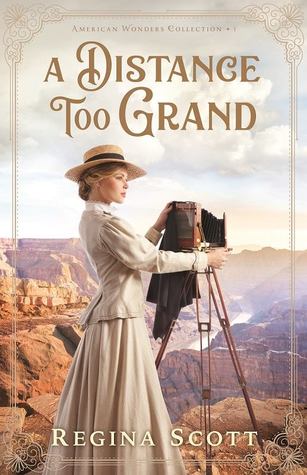 When a spunky photographer wrangles her way onto an 1871 survey crew of the Grand Canyon she thinks nothing can stand in her way. But her mind changes when she finds out she’ll be working alongside the one man she doesn’t want to fall in love with.

A Distance Too Grand by Regina Scott is a wonderful novel. I loved the characters instantly. Meg Pero is an amazing photographer. But during her time, women should be marrying and having kids. Meg rejects that lifestyle and pursues her dream career. A well-known photographer, like her father, Meg proves her worth. Then, there is the dashing Army slash former lover, Ben Coleridge. He loved Meg from the moment the met until she broke his heart. He still dreams of their life together. But Meg keeps pushing marriage away. Ben’s mother is super protective and is part of the problem. She caused Meg to believe she isn’t worthy of being Ben’s wife. Meg is so independent it’s refreshing. Ben fights between not getting his heart broken and wanting to keep Meg in his life. There’s the problem of an invisible thief, a murderer, and two missing men. One of them being Ben’s father. Shocking news for the characters are juicy scenes. With every problem, there’s a solution. The cast matures  as the plot thickens. I was well-entertained. Regina Scott knows how to write a fascinating adventure.

One thought on “Review: A Distance Too Grand”