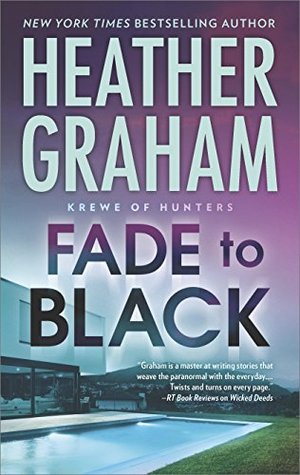 Where dreams go to die…

Starring in a cult TV show was a blessing for Marnie Davante, especially now that her former fame could support her future dream of starting a children’s theater. So she’ll work the convention circuit. But then a costar is brazenly murdered in front of her. With a killer who vanishes into thin air with seemingly inhuman skill, and strange events plaguing Marnie, she feels she can’t even trust her own senses.

Although his dear departed parents were famous actors, PI Bryan McFadden is about as far from Hollywood as you can get. The former military man is reluctant to get involved in such a bizarre case, but it quickly becomes obvious that Marnie is in grave danger, and he is compelled to help. It’s unclear if the killer is an obsessed fan or something more sinister. Could the show’s cast be cursed? How can Bryan keep Marnie safe when it becomes apparent there’s a force determined to make this her final curtain call?

Fade to Black by Heather Graham was interesting. I was hooked. The plot quickly introduced me to the cast of characters, gave me their story and told me what they were dealing with. I enjoyed watching the living squirm with the idea that their loved ones were haunting them a bit. A gruesome murder needed to be solved and the ghosts were going to stay until it was solved. But they needed an expert investigator and for their living friends to help with the case. So many possible suspects, it was hard to guess who the mastermind evil one was. I enjoy following Heather Graham’s latest story as always. Suspense, dark plot, and plenty of action are always inside the novels. This is definitely one I would recommend to other readers. Humor plus, a thriller with paranormal themes made for a great journey.