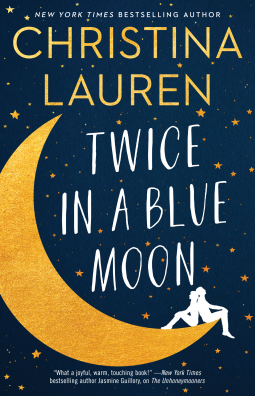 From the New York Times bestselling author of The Unhoneymooners and the “delectable, moving” (Entertainment Weekly) My Favorite Half-Night Stand comes a modern love story about what happens when your first love reenters your life when you least expect it…

Sam Brandis was Tate Jones’s first: Her first love. Her first everything. Including her first heartbreak.

During a whirlwind two-week vacation abroad, Sam and Tate fell for each other in only the way that first loves do: sharing all of their hopes, dreams, and deepest secrets along the way. Sam was the first, and only, person that Tate—the long-lost daughter of one of the world’s biggest film stars—ever revealed her identity to. So when it became clear her trust was misplaced, her world shattered for good.

Fourteen years later, Tate, now an up-and-coming actress, only thinks about her first love every once in a blue moon. When she steps onto the set of her first big break, he’s the last person she expects to see. Yet here Sam is, the same charming, confident man she knew, but even more alluring than she remembered. Forced to confront the man who betrayed her, Tate must ask herself if it’s possible to do the wrong thing for the right reason… and whether “once in a lifetime” can come around twice.

Twice in a Blue Moon by Christina Lauren is one read I couldn’t put down. The plot was full of drama, first love, scandal, and betrayal. This author tied in so many things but made it feel so real. The characters had their flaws as well as their good points. Each one had to learn who they were and where they were headed. A young girl never knowing her father dreamed of meeting him. Then, she meets a young man who swept her off her feet. It felt magical. But as with Cinderella, good things came to an end. Or so I thought…surprises were on every page.

Hot, steamy, and fun-Twice in a Blue Moon had me on the edge of my seat twice. These characters knew how to draw my attention and keep it. Family was a major theme. Sometimes, it isn’t always the ones that are related to the characters. Love came in all forms. The age gap, the race difference, and the stung of betrayal by a blood relative are all in this crazy-good book. Never was there a boring in this book. Just when things seem to go in one direction there’s always a turn of events. The ending was just as perfect as the beginning.

If you love second chances and romance, then this is the book for you! I have not meet a Christina Lauren novel that I didn’t like yet. Check out her latest read! I highly recommend it.