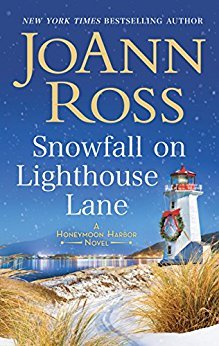 Lose yourself in the magic, charm and romance of Christmas in the Pacific Northwest as imagined in JoAnn Ross’s heartwarming Honeymoon Harbor series.

Growing up on the wrong side of the tracks, Jolene Harper is forever indebted to the mother who encouraged her to fly—all the way to sunny LA and a world away from Honeymoon Harbor. Although Jolene vowed never to look back, returning home isn’t even a question when her mom faces a cancer scare. Which means running into Aiden Mannion all over town, the first boy she ever loved—and lost—and whom she can barely look in the eye.

Aiden’s black-sheep reputation may have diminished when he joined the marines, but everything he’s endured since has left him haunted. Back in Honeymoon Harbor to heal, he’s talked into the interim role of police chief, and the irony isn’t lost on the locals, least of all Aiden. But seeing Jolene after all these years is the unexpected breath of fresh air he’s been missing. He’s never forgotten her through all his tours, but he’s not sure anymore that he’s the man she deserves.

Despite the secret they left between them all those years ago, snow is starting to fall on their picturesque little town, making anything seem possible…maybe even a second chance at first love.

Snowfall on Lighthouse Lane is both funny and charming. The cast of characters includes a ghost of a dead police officer. His surviving partner is feeling survivor’s guilt and has been living like a hermit. But with his family and ghost partner, Aiden, may just learn to live again. His life takes on a drastic turn when he becomes the new sheriff. Murder and corruptness is at the heart of the investigation. Aiden fights to protect his town and the name of police officers in general. To add to this mixture would be his long-time love, Jolene. They both felt the sparks renew the moment the laid eyes on each other again. Jolene is hesitant to fall so deeply in love again. Plus, her mother is going through a difficult time. Yet somehow, fate has them pushed together once more. Maybe, second chance at romance will happen, maybe not. First, Aiden needs to survive the danger of being an officer and then the risks of the heart. Overall, this read was satisfying. I was entertained from the start. I laughed a lot and I liked the characters.