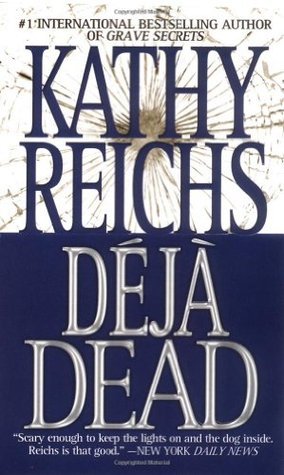 Synopsis:
Her life is devoted to justice; for those she never even knew. In the year since Temperance Brennan left behind a shaky marriage in North Carolina, work has often preempted her weekend plans to explore Quebec. When a female corpse is discovered meticulously dismembered and stashed in trash bags, Temperance detects an alarming pattern and she plunges into a harrowing search for a killer. But her investigation is about to place those closest to her, her best friend and her own daughter, in mortal danger…
Rating: 3.5-stars
Review:
Deja Dead by Katy Reichs is a slow building murder mystery novel. Forensics is a major part of this read. A forensic artist is plunged deep into dark murder investigation. Temperance has a lot to lose when she gets involved. But she has a crime to solve and won’t stop until it’s closed or until she’s dead.
I liked the crime and forensic parts to this book. They were done great. However, the rest of the book felt too dragged out or in other words it all happened too slow. The writing tells more than showing. Which leaves me, as the reader, feeling like there’s barely any action. Action speeds up the plot. In this case, the novel felt like someone was telling a story about a novel they read. So, I did not feel so intrigued as I would have liked to be. Parts were good and some parts were not done well. This novel was good, could have been better. The suspense and action elements should have been higher and more felt. I wasn’t that hooked.