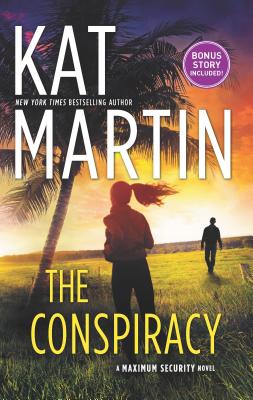 Harper Winston’s brother has disappeared. Pursuing his dream of sailing the Caribbean, Michael hasn’t responded to texts or emails in days. When even the Coast Guard can’t find him, Harper is forced to take desperate measures. Which means going to Chase Garrett, once her brother’s best friend, now the only man she can trust…or so she hopes.

As the successful owner of Maximum Security, Chase has learned to trust his gut. He knows Harper’s father is mixed up in a deadly business, and suspects there’s more to Michael’s disappearance than meets the eye. Getting involved again with the Winstons goes against everything he stands for, yet old loyalties die hard. As the case draws him closer to Harper and deeper into the Winstons’ snarled crime family, he is forced to put everything on the line to keep Harper safe…and both of them alive.

Kat Martin surprised me with this novel, The Conspiracy. It held a dark intriguing edge that I couldn’t let go. The family involved had its own secrets. Criminal secrets…that could be deadly. A sister is determined to find her brother Michael. So far, she hasn’t much to go on until, Chase joins her. Something lures him to both her and her case. A deep bond starts to develop as they two learn to trust each other.

The scenes escalated quickly. Plenty of danger and suspense to satisfy all. I was hooked. This tale is definitely for fans of romantic suspense novels. It contained both elements. Both Chase and Harper were my favorite characters.