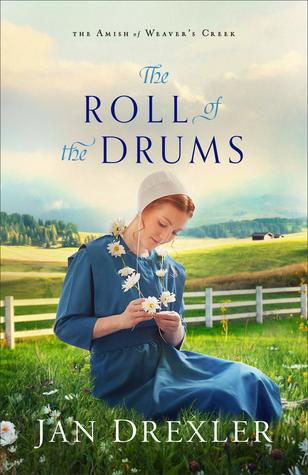 Ruby Weaver’s curly red hair isn’t the only thing that sets her apart from her Amish community in 1863. Twenty-eight and single, Ruby doesn’t believe a woman needs to be married in order to be happy. Her ailing friend Lovinia Fischer, however, has other ideas and wants Ruby to promise to marry her husband after she dies. Never imagining she’d have to fulfill that vow, Ruby agrees. And she’s not the only one. Lovinia has extracted a similar promise from her husband, Gideon.

With both Ruby and Gideon reluctant to keep their promises, a compromise must be reached. Ruby will spend her days with Gideon’s family–helping to raise the children and keep the house–but her nights will be spent at her sister’s neighboring house. But this arrangement raises eyebrows in their conservative Amish community, and it soon becomes clear that Ruby must make a decision–marry Gideon or turn her back on her friend, the children she’s grown to love . . . and their father.

Jan Drexler’s, The Roll of the Drums, is a heartfelt Amish novel. This is an inspiring tale of how one Amish woman’s life takes a surprising turn. Happy being single and helping her friend out with the care of kids, Ruby is sworn to a vow. A vow that Ruby never thought would take place. But it did. Now, Ruby can either keep it or break it.

Complicated, charming, and sweet, The Roll of the Drums, is a great read. I found each of the characters likable. They were easy to follow. They had my heart from the beginning. An Amish woman wants real love. A marriage of convenience isn’t on her to-do list. Life has a funny way of giving those what they want when they least expect it. Or in ways they didn’t think would work out. As with other Amish novels, what God has planned, God will carry out. In this case, it’s Ruby being hitched to Gideon. Two people who may have just found their forever love. Themes of faith, family, and work ethic are also on these pages. I was thoroughly entertained with this story.